Arif Zakaria debuted in Indian television years ago with Chunauti and went all the way to excel in films. He has dedicated himself as an actor and has showcased his talent in television, films and theater. 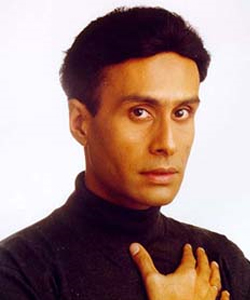 Arif is now essaying a vital role in Kaali - Ek Agnipariksha as the protagonist's father and is well appreciated for his performance. Here he gets candid about himself to Tellybuzz

What kept you away from TV for a long time?
Though there were some good offers coming by, I was skeptical about adjusting to the rigors of a daily TV show. Television is demanding and consumes a major chunk of your time as well as life. Also I was waiting for a good role.

What made you decide to make a comeback on TV with Kaali?
Firstly, it was being produced by a reputed production house Fox TV and the story was a little different from the milieu. Also the character of 'Veerendra' was equally exciting as I am playing the role of both mother and father to a young girl and this certainly was challenging.

Do you feel the late night time slot given to Kaali has affected its ratings?
Personally, I would have preferred an early slot say of 9 p.m. So yes, I think the show would have had a broader appeal if it was telecast in an earlier time slot.

Kaali has managed to maintain the TRP of 2 for many weeks now. But we have not seen it increasing. What can be the factors?
I have been told that a TRP of 2 for a late night slot is quite good. The script written by Mrinal Jha is enthralling with a lot of twists and turns and there are lots of hidden twists which the audience will see in the next few weeks. So, I am hoping the TRP's will increase gradually as and when these twists and turns unveil.

How is it to work with Star Plus?
I haven't interacted much with the channel, but it's good to be on a channel which has such an established audience. I have worked with Star in its nascent stage too while I did 'Dawn'(English) in 1996 and then Pooja Bhatt's show 'Dhund' in 2001.

Do you think bold concepts like Kaali can be shown on television?
Yes, I think we are ready to watch bold, innovative shows which tackle diverse issues like divorce, infidelity, etc. If the show is well made and is relatable, people will not only enjoy, but also learn from it. It will also help spreading social awareness in the society.

Have you come across a girl like Rachana in real life?
Hmm… Not really.

What kind of a message do you think Kaali is giving to the viewers?
Kaali gives an important message that we as humans should stand up for any injustice we suffer and family values are really really important.

How it was working with Sonali Kulkani since you have worked with her in films in the past?
I have worked with Sonali Kulkarni a few years ago in a film 'Dressing Room' and I've been familiar with her work on stage and film since years. She is experienced, understands the nuances and it is easy to work with her and relate to. Though in 'Kaali' she plays my dead wife, she still has an omnipresence, wherein my daughter and myself have various scenes addressed to her photograph or her memory.

How is it to communicate with dead wife on-screen?
Even though the wife is deceased, there is a lot of earlier references given to the relationship. As a result the dead wife's memory guides, takes care and is a constant source of support to the family especially in times of a crisis. There is also a beautiful love story between husband wife which plays out in scenes, so talking to a dead wife is emotional, challenging and is a beautiful dimension to what was once (when she was alive) a pure, committed relationship.

What changes have you found in the TV industry from the time you did Chunauti and Campus to the current soaps?
Today channel is the boss where earlier the directors held sway. The pressure for delivering episodes is tremendous; hence the quality of creativity suffers. Earlier we had weeklies which were not time consuming and gave ample scope for writers and actors to come out with something special and innovative.

Which was the most struggling part of your life?
Professionally, each assignment that you accept becomes a struggle. But on a personal level the most struggling part of my life was the period of many years that took me to decide whether to take acting as a profession or as a hobby. I went through an emotional, mental and physical struggle to finally convince myself to become an actor by profession rather than a lawyer.


What advise you would offer to new actors?
It is all hard work and nothing else. My advice is to stick it out and enjoy the ride

Do you feel that males on TV don't get their due as it is women dominated medium?
Everything is women oriented, as if the channels are getting back at men for dominating women for so many decades. But it's scary too at times because men have become mere arm candies for women on TV.

Who is your inspiration when it comes to acting?
I used to admire Kamal Hassan for his verve, versatility and energy till Dashaavataram came along. But presently there is no one in particular, though I think Hrithik Roshan is a complete actor.

It's not necessary to be conventionally good looking to be an actor.
I would like to use a quote from Ram Gopal Varma that 'to be an actor you need to learn acting, learn fights, dance and groom yourself otherwise you might become Rajnikant!'

Tell us something about your nature
I had learnt to speak less as I grew older and I have made silence as a part of my personality and thus became reserved by nature. But at the same time I am a little impatient with people and I do have a broad sense of humour.

Where do you see yourself in five years?
Five years down the lane I would be hopefully using my knowledge and experience to create value in society through my craft, which are films. I also hope to do a memorable role and direct a memorable film. I am also hoping to write a book as well.

What were the landmarks of your career?
As far as landmarks are concerned there have been quite a few. The first time I faced the camera while doing the serial titled 'Chunauti', my experience of working in my debut film 'Darmiyaan' and performing in big musical halls in Europe with my stage show 'Merchants of Bollywood'; I consider these as my special privileged moments akin to landmarks.

You have done films, TV and musical shows. Which medium have you enjoyed the most and why?
I enjoy films the most because it's less taxing on the actor while stage is very demanding.

Are you satisfied today as an actor? If not, what are the variations as an actor that you would want to project now?
I would like to expand my repertoire as an actor and do diverse roles in films and television.

What are the kinds of roles are you looking out for?
Roles which have an emotional core though I would like to explore comedy too.

+ 2
10 years ago good interview...some of the things said by him r very true

+ 5
10 years ago So true, now I am a woman, but it's weird seeing men fading into the background- everything revolves around women, a male actor would have to be extremely lucky to get a role in which he has more importance than the female. Nowadays the men just stand there like statues whilst the women fight and appear even stronger than them!! x

10 years ago Very good interview. Many thanks! Arif Zakaria is a very good actor.