View Profile
It's not an unknown fact that television has launched some of the most talented and famous people in the entertainment industry. Why, even King Khan made his entry through the small screen! 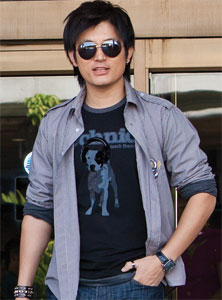 Meiyang Chang who reached the top five in Sony's Indian Idol Season 3 never tires of praising the show. He says, "Whatever I am today is because of the recognition that Indian Idol gave me. It trained me not only in singing but in other aspects as well. For example, I learnt to be open with people during the course of the show. In fact, Parmeet Sethi ji noticed me in Indian Idol and called for auditions of Badmaash Company."

Meiyang who has hit the jackpot by bagging a role Yashraj's latest flick Badmaash Company narrates an interesting incident to us. "We had a sequence to shoot at Nariman Point. There along with Shahid Kapoor, people recognized me and shouted 'Chang, Chang'. It is a nice feeling to know people remember you," he smiles.

Meiyang has mixed feelings about the fact that he is no more a part of the Indian Idol journey. He says, "After the third season, when I was asked to host the fourth season, I was more than happy. They didn't approach me for the present season and I'm not sure even if they would have, I'd have enjoyed it. Because a lot of changes happened after the third season. The production house changed and many people who I knew no longer belonged there."

The singer turned actor has an added reason to be thankful for Indian idol. He found his sweetheart in Monali Thakur who was part of Indian Idol 2. He says frankly, "Monali Thakur is my girlfriend. I'm happy that she is also a part of my first film. She is giving the voice-over for Anushka Sharma."

We wish Meiyang all the best for his film Badmaash Company that releases on May 7th.

10 years ago Monali and Chang! awww
best of luck!

+ 3
10 years ago Anjali--No Monali is his GF..they had a huge rumor about Deepali..but that wasnt true

10 years ago I thought Deepali was his gf..anyways...