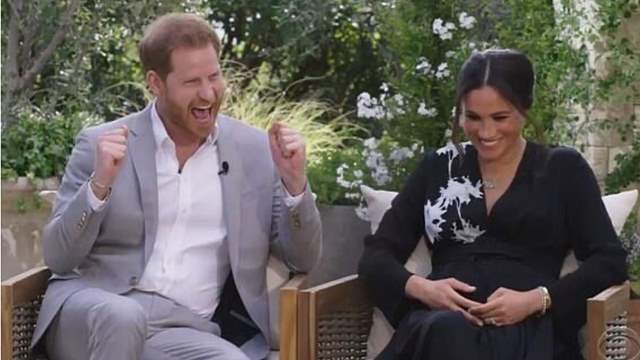 Meghan Markle and Prince Harry sat down for a two hour interview with Oprah Winfrey. The interview aired on CBS on Sunday wherein the Duchess of Sussex made some earth shaking revelations about facing racism, colonialism, concerns about son Archie’s skin colour and having suicidal thoughts.

On the contrary, in a piece of good news, Meghan and Harry made a big reveal about their second baby. The couple had announced their pregnancy last month.

In the interview with Oprah Winfrey, the couple announced that they are having a girl. "To have a boy then a girl — what more can you ask for?" Harry said during the interview.

When Oprah asked them if the couple will be having anymore children after this, Meghan replied by saying, "Two is it.”

The former Suits actress was seen with a small baby bump during the interview. She is due in June.

Speaking about becoming a father to a baby girl, Harry added, "Grateful, having any child, any one or a two would have been amazing, but to have a boy and then a girl...now we've got our family and we've got four of us."

Meghan and Harry announced her second pregnancy with a beautiful post on Valentines Day, February 14, 2021. “We can confirm that Archie is going to be a big brother,” the couple said in a statement. “The Duke and Duchess of Sussex are overjoyed to be expecting their second child.”

The couple had welcomed their first child, a baby boy, Archie on May 6, 2019.