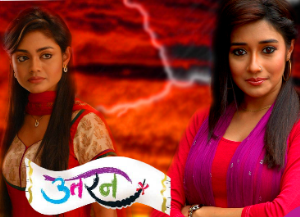 Film Farm Productions' popular show Uttaran on Colors is coming up with various twists and turns to attract the viewers attention. The show recently completed 1400 episodes and is yet going strong in terms of the drama and the twist.

Well, now the show is all set to head towards the leap. Following the leap the entire storyline of the show will change and Meethi (Tina Dutta) will be seen staying with a new family.

Thus the leap will take a major turn in the life of Meethi and Aakash as the duo will get separated.

According to the sources, "Meethi will leave Aakash after knowing the truth that she can't conceive. She leaves her home and catches a train where a bomb blast takes place. Now after the blast she gets drowned in the river and she is brought up by a family in Pakistan.

Adding further our source says, "Now an altogether new family will be introduced who will give shelter to Meethi. Meethi will be seen staying with this family in Pakistan whereas Aakash (Mrunal Jain) and his family will think that she has died in the blast. The family introduced will be a Muslim family and Meethi will reside with them."

On contacting Tina Dutta she says, "The show is not taking a leap but the story line is changing completely even the time slot is changing. The entire cast will remain same only few new entries will be seen in the show. Audiences will get to see many interesting things in the show."

To get more updates keep reading this space.

bm666 6 years ago Uttaran is possibly one television serial which has some really great actors-Tina,Gaurav,Vaishali..you name it, they have it. And it is also one tele-show which has a lively storyline going on at any time. People just like to bash Uttaran as its running since long-5.5 years to be precise. If the exact same storylines are played out using the exact same actors but in a different show, then it would be highly appreciated. Uttaran is easily one of the consistent soaps ever in Indian television history. Uttaran bashers, go get a life.

6 years ago i just hate this show...they r simply dragging it...its totally out of d theme...

6 years ago well the story writer has gone totally mad...SURVIVING A BOMB BLAST AND SWEPT IN RIVER AND LANDING IN ANOTHER PLACE AND FAMILY...PHEWWW .IS MEETHI A SUPER WOMAN WITH NO DEATH
LOOKS LIKE AM READING ALICE IN WONDERLAND ...THEY WILL GIVE THE DISNEY FAIRY TALES ALSO A RUN FOR THEIR MONEY...

WELL THE ACTORS AND THE TEAM HAS LOST THEIR MIND ACTING IN THIS CRAP...THEY WILL NOW TURN THE LAST LOYAL VIEWERS ALSO MAD...

CHANGE THE TITLE OF THE SHOW FROM UTTARAN TO ..." MAD NIGHTS "

+ 2
6 years ago and the crap uttaran continues Boring

6 years ago Tina Dutta is awesome !!Love u Mrunal Jain 1

So if Muktha will die, then will Vishnu ever recover from Coma ? Who will take care of the baby ?

6 years ago Love you Tina Dutta . U r amazing actress..

and moreover vishnu has nothing 2 do bcoz ajay chaudhary is currently shooting 4his short film so vishnu is shown in coma.

+ 2
6 years ago Really want end of this serial, but this sounds good to watch we will see it :)