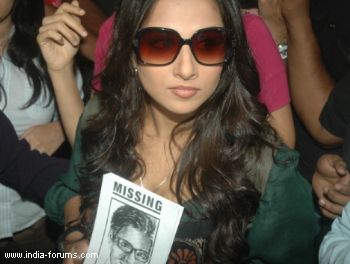 Parambrata, Param to friends, plays Vidya's distressed spouse-searching character's cop-saviour who breaks protocol, rules and conventions to get her to her goal and somewhere down the line becomes subtly attracted to her.

Parambrata conveys his growing affection for his leading lady with a silent eloquence.

So yes, Parambrata is the hero of "Kahaani".

"Wrong! 'Kahaani' already has two heroes, Vidya and Kolkata. I'm the film's heroine," he quips mischievously from Shanti Niketan where he's shooting his new Bengali film as mobs threaten to disrupt the shooting.

Last year's Bangla superhit "Baise Shrabon", which starred Prosenjeet and Parambrata, became a blockbuster and turned the latter into a Kolkata superstar.

Now "Kahaani", hopes Parambrata, would make him a familiar figure in Bollywood, though he admits he's happy being a star in West Bengal and doesn't crave for acceptance in Bollywood.

How the role in "Kahaani" happened makes an interesting story.

"I was abroad in Amsterdam with my girlfriend when I received a call from Mumbai. Before I could introduce himself to Sujoy Ghosh, he showered the choicest expletives on me asking me to return to India to start shooting for his film. He had seen my work in Anjan Datta's 'Bong Connection' and felt I was right for the role," he said.

"From Amsterdam, I was supposed to go with my girl to Paris and Rome. Paris, I couldn't wriggle out of. But Rome I cancelled and returned to India for 'Kahaani'. That's my kahaani," he added admitting that he had to work hard on his Hindi, but not so hard on establishing a rapport with Vidya.

"You know, by a strange coincidence Vidya and I both did our first film 'Bhalo Theko' in Bengali, together. We hadn't met since then. But the minute we were together for 'Kahaani', it was just like old times. Vidya is a huge star but absolutely hassle free. She takes her work dead seriously. But is a bundle of fun off camera," he said.

Parambrata is in a long-distance relationship with a Dutch girl.

"Her name is Ike Schouten. And we've been seeing each other for two years. She spends some months of the year with me in Kolkata. And I fly down as frequently as possible. Ike is too kicked about 'Kahaani', not only because I'm in it but because it was shot in Kolkata. She can show all the places that he loves in Kolkata to her friends in the Netherlands."