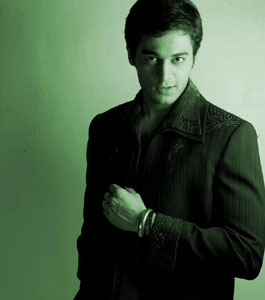 One cannot help but love him as the playful, mischievious, setting master Sharman Wadhwa in Kumkum, or the suave, sexy & stylish Ruhaan Oberoi in Meri Doli Tere Angana.. Good looking, versatile & an extremely gifted actor, here's presenting to you an Exclusive heart to heart chat with the very down-to-earth, cool dude - Gaurav Khanna.

Tell us about your family...

Gaurav: I come from a very close knit joint family. Well I have a big family both on my dad's and my mother's side. Lots of brothers and sisters, a lovely group I must say. I have an elder sister who is married. I love my mom and my dad and its only because of them that I am here...

Gaurav: As a kid I was very cranky and stubborn (atleast thats what my mom tells me), then I grew up and had interests in all outdoor sports and was also a good student - house captain, sports captain, very outspoken , extrovert and yes used to paint really well, did oil on canvas. I still do it sometimes, have won many awards in it and ya one more thing, I never liked losing anything. I used to do stupid things sometimes, but was a likeable kid and also mimicked everybody........

Gaurav: Childhood memories are many, I remember all my awards and prizes I won as a kid. I felt really great standing in front of everybody and receiving the honours. It was always the best feeling I had, it boosted me to do even better and take up new challenges.

Your achievements in childhood

Gaurav: Well achievements were many, atleast they mattered to me the most. Won over 80 awards in drawing and painting competitions, was good in sports. I was captain for many sports at my school and college level in cricket, hockey, table tennis, swimming. I won many elocution and debate competions. I must say I have thoroughly enjoyed my childhood.....all my certificates are kept with my mom in Kanpur and cups and shields are kept in a special cupboard....... (smiles) 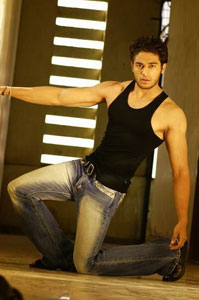 When did u start modelling and which was your first assignment as a Model?

Gaurav: I started modelling when I came to Mumbai for my MBA degree. I used to do modelling (ramp shows) for extra pocket money on weekends. Then one day someone in my gym noticed me and mistook me to be a model. To his surprise, I turned out to be a MBA student, so he pushed me to try in this arena little more seriously. I immediately got a portfolio done and got my first ad for Principle Focussed Fund. I remember we were 5 guys and 4 of us were new and one experienced. The main guy was Inderneil (Ek Radha Ek Shyam). We all were shown to be archers targeting an aim...I remember I waited long to see myself on that TV set, but to our bad luck all 4 new guys were not shown in the final ad, it was Inderneil's solo ad later... I am friends with all the guys in it and to share something I must say that, that ad was lucky for all of us. All of us are doing some work or the other on television now..The guys were Mohit Mallik (Aoni from Millee, also doing Jab Love Hua), Kanishk Saluja (Bali Brambhatt new album guy) and Aneesh(Gladrags Finalist 2004). Well moving on, I got my first solo ad - Tata Indicom Gem...(father and son ad in which my last words were--mummmmmyyy)...

Your first stint in TV?

Gaurav: My first TV stint was for a teleseries on Star One called 'One Night Stand'. I played a cameo of a young college going guy who takes tutions, and my character name was Sunny sir.. Guess what, my co-star was a new girl who later became 'Mira' in 'Kyunki Saas bhi..' Then I did 'Siddhant' (played Tanmay Bakshi), then 'Bhabhi' (played Bhuvan Sareen) and now 'Kumkum'( Sharman), one of my favourite character...

What do u think about serials... and Kumkum in particular?

Gaurav: Serials are good fun, they are like spicy chutney chat, masala, pani poories! And two words for Kumkum serial, they are 'Kumkum Rocks'...because of people like you. Thank You!

How is it working with Husein and Juhi ?

Gaurav: Working with Husein and Juhi is awesome , atleast for me being a newcomer they are an institution. I have learnt so much from them. Husein is like my big brother of screen. Tina and him are like family to me in Mumbai...Even Vivan and all the other bunch is awesome. I must say Juhi pulls my leg the most but I like it. She is fun to be around. Basically I like happy people and I’m lucky to be surrounded by the best in that category...I feel bored when am at home and not shooting with them....they are fun man!

Gaurav: My dream role is any role I do; for this is a dream come true for me in itself. I never thought I would be in this line, when I was working as a Marketing Manager in an IT firm after my MBA. But I must say there are some roles I would love to do like Joey in Friends, Jim Carrey in the Mask, Arnold in Terminator 2 etc. 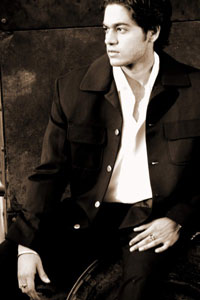 Share with us some of the pranks you play on sets?

Gaurav: OMG pranks! We do a lot of them. You people should sometime come and see us on the sets when we are not shooting. You can hear me laughing my wits out from any corner......with me u can find Husein and Vivan for sure. Being the youngest, I get away with anything.......touchwood for that....We mimic each other, redo scenes with different characterizations, crack jokes, make plans to make bakras etc. Well I was a victim of one such prank...what happened was that in early days of my shoot, I started getting calls from this girl who knew everything about me. She called me late at nights, early mornings ,sent romantic messages and surprisingly was one smooth talker! She said she wanted to meet me anyhow. She said she liked me types. So one day after a month of trauma of being stalked, I agreed to meet her and see her off. But to my surprise, it turned out to be no one else but sweet Tina and Husein jumped out of another car with a camcorder (to my luck he couldn’t use it and nothing was recorded), from the other side came out Vivan and other guys......I must say,Tinaa is verrryyy badmash(laughs) She then treated all of us with pani poories which she made herself, so this was a good one....

What do you do after shooting?

Gaurav: After shooting, we pack up and if we have time we go out for dinners or movies...atleast me, Husein and Tina go out often. Vivan also chips in sometimes. He is another brat I must say. I sometimes laugh at Husein and Tina that it seems that they have adopted me.....

Any actor/actress you would love to work with?

Gaurav: I would love to work with Amitabh Bachchan man....and in ladies......Angelina Jolie, Scarlet Johanson.....hmmmm..!!!

Any particular director you want to work with ?

Gaurav: Director I would love to work with is Stephen Spielberg. He is one cool director so ahead of his times , I wish someday I work with him.... In India I like Ram Gopal Verma.

What’s the secret that you are so handsome...or anything special you do that makes you so handsome?

Gaurav: (Laughs)Thank You! I take that as a compliment. Probably my genetics.. I just like to keep fit, exercise, play, and basically be happy....thats very important!!! Always be happy...smile is the best weapon you have, so use it. Try it and see how all the things fall into place... 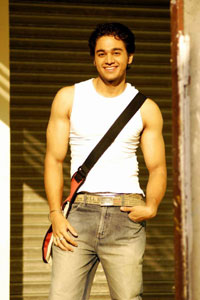 Most memorable moment from your show Kumkum?

Gaurav: There was a scene in the first episode where I pick up Juhi and run away from Husein. Actually I remember picking my mom up and running and she getting paranoid back home. Then one scene where Husein slaps me was also an appreciated scene, I liked it too.....

What are your plans for your future?

Gaurav: Actually everything I planned has taken a U turn in life... I’m not complaining though but as of now I am concentrating on my current job. But yes future will turn out to be good I hope and pray to god.....I have full faith in him....

The best compliment you have ever got...and by whom was it given?

Gaurav: I don’t get many of them ,so its hard to remember. But it has to be by people who say that they like me as Sharman and think I fit the role, so that I think is really welcomed.

How is it to be a celebrity?

Gaurav: Am I a celeb already?(Laughs) , strange I never knew that. Well it feels really nice to be noticed for your work. I say anybody who does his or her work properly is a celeb....like u guys so enjoy your celeb status.....!!!

How much do you relate to your character Sharman and did you ever do anything like Sharman?

Gaurav: Oh I relate to my character quite a bit....like I was the younger lot at my place back home. Little pampered by my mom, prankster or setting master you can say. I was always making people laugh with my stupid inputs, but there are certain things I don’t relate to, as not studying and looking for Mayas everywhere. Actually I was a good student that’s why I did complete my MBA in Marketing.. and in that Maya case, I didn’t run so much after girls.But I think I could have or rather should have, that way Sharman is better than Gaurav I must say.......(Laughs)

All said and done, a ‘Master of All’, whether it be Studies, Sports, Acting…. ,the list goes on and on!! This is Gaurav Khanna for you all.. Wishing the Hot Hunk All the Best in Life.

11 years ago Love u sooo much Gaurav...ur the bestest...this interview was awesome and the first thing that drew me to I-F..Thanks Eks, Anks and Rachu...and he truly deserves to be the 'Awwal number'

11 years ago Love you loads, dearest Gaurav!!!
Wish you come back with another show very soon...Miss u so much:((

11 years ago Its lovely to return to old times:)love u gaurav!

15 years ago i find him very handsome....!!he is rockstar wid so many medals!

+ 4
15 years ago Wow amazing article!
He sounds so fun and joking..

+ 5
15 years ago aww wow!! amazing article...he seems soo full of life and fun to be around...wish they would show some of these hilarious pranks on TV...