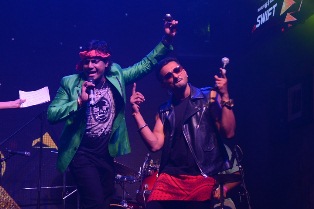 For all the female fans across the world, here's a bit of news that will disappoint you! For the first time ever Yo Yo Honey Singh will be introducing his wife Shalini on Star Plus' India's Raw Star. The popular mentor was caught in a mix of emotions a day prior to the launch of his album, Desi Kalakaar'. Honey Singh refused to shoot for the show till his better half did not come on the set.

A source says, "Honey was extremely anxious and nervous and did not want to go ahead with the shoot till his wife came on the set. Shalini who was dressed in black appeased the Honey and took him backstage for some time. It was only then, after four good hours that the shoot was resumed. In fact once the shoot started, Yo Yo said that his wife has a very important place in his life and he listens to her no matter what happens."

"This is not all Honey even promised to focus more on the show now and even do rehearsals with the contestant before the shoot.

Honey Singh was even seen apologizing to everyone for the delay and he also promised that this was the last time and he would never do that again in the future." Adds the source.