Colors' longest running show Udaan, recently saw a leap and new actors, Gaurav Sareen and Tanya Sharma were roped in for playing the lead roles. Actress Meera Deosthale who plays Chakor in the show was in buzz for quite sometime now as she decided to quit the show.

Though the news of her exit was out since long, she didn't leave the show until the Mahasangam episode of Udaan and Ishq Mein Marjawan. Now, the actress has finally wrapped up and shared a sweet message on her social media bidding goodbye to the show.

In the post, she wrote, "15.2.2016 - 1.4.2019. A wonderful show with wonderful people working on it and associated with it. A beautiful chapter of my life which moulded to me to be who I am. Has given me more than I could ask for. Has given me all of love and blessings."

"Thank you for making this happen. I shall cherish each and every day and moment forever. Till we meet again."

As we already reported, the makers have roped in Balika Vadhu fame Toral Rasputra for portraying the role of Chakor, after Meera's exit.

We wish Meera all the luck for her future endeavours. What are your thoughts? Are you going to miss watching her on the show? Drop in your comments below.

Varsha Usgaonkar takes a trip down the memory lane as Mahabharat airs ...

When 'Naati Pinky...' fame Riya Shukla was kidnapped at home

Tanya Sharma to make her digital debut in a Royal Wedding

Nimrit Kaur and Param Come together to Make a Creative Bird!

malarmia 11 months ago Best decision ever, Meera Deosthale. You are missed as Chakor but great shows await you. All the best!

LuvSSever 1 years ago Her farewell videos and Post made us way too emotional though awaited this day. #MeeraDeosthale aced as Chakor. She has potrayed chakor to perfection.All the very best to het for future projects. Awaiting her comeback

Ruby7 1 years ago Meera Deosthale, loved all your recent segments. 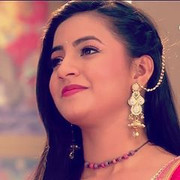 MayurArti_rocks 1 years ago All thes best Meera for future projects. I loved Chakor and Suraj a lot. You and Vijeyndra were awesome as Sukor.

Vjlove1210 1 years ago She is wonderful as Chakor, I miss sukor:-)
All the best Meera deosthale and vijayendra kumeria for bright feature.

Shaina_b 1 years ago This show should end now!!!!

Even Chakor and Raghav are not here anymore!!!

Akfreen 1 years ago Meera Deosthale
Best of luck for your future!

nemo316 1 years ago All the best to Meera Deosthale. Wish her a bright future.

Shubhangi Atre Quits Tiktok & Talked About Having Made New ...

Seth Rogen Shuts Down Critics of His 'Black Lives Matter' ...

'It Brings Back So Many Memories!': Madhuri Gets Emotional ...

First Look: Sushmita Sen Is 'Working It Out' In Upcoming ...

AlayaAF's First Episode is all About Teaching Us How to be ...

'I would be Shocked when she would Call me in the Middle of ...

Toral Rasputra Reveals she might have to take break for ...