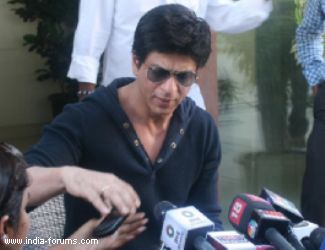 Experts say it is a first-of-its-kind decision when a celebrity has been penalised for his or her misconduct, while B-town feels any father would have behaved like that.

"Any celebrity has not been punished or banned for such a small issue. Salman Khan and Sanjay Dutt were punished but it was a different and big issue. Shah Rukh's issue has been blown out of proportion and this simple issue came to a sad end," Mumbai-based journalist Indramohan Pannu, told IANS

"I have been working in this industry for more than 28 years but this is for the first time a leading celebrity has been punished for such a small thing," he added.

Another veteran journalist, who has been following the film industry for 22 years but did not wish to be quoted, said: "I do not remember of coming across any celeb or a person in power to be punished for misdemeanor. At the same time, I feel that being banned to enter a cricket stadium by an association is barely a punishment."

Vilasrao Deshmukh, the union minister for science and technology, said that the managing committee of MCA "condemns the behaviour of Shah Rukh Khan. After his fight at the stadium Wednesday night, the actor has shown no regrets for his action and behaviour."

He said nobody could support such behaviour, be it the Board of Control for Cricket in India (BCCI), the Indian Premier League (IPL) or the MCA.

"This is a message for everyone. Anyone who misbehaves or breaks any rules shall face a similar ban," said Deshmukh.

Asked why no committee was set up to probe the incident, Deshmukh said that majority of members were present during the brawl and they were all witness to the incident.

In his clarification, Shah Rukh alleged that he got upset when he saw MCA officials allegedly manhandling his daughter.

"We have not received any complaint from Shah Rukh Khan yet... We will also genuinely look into the matter if Shah Rukh lodges a complaint regarding the same," said Deshumuk.

He added, "BCCI has been informed about the ban, but since this property belongs to MCA, we have decided on the ban."

However, BCCI vice president Rajiv Shukla said: "The decision has to be taken by BCCI. MCA can recommend but BCCI will take a final decision."

"He (SRK) carries a lot of weight on his shoulders. His behaviour matters to the industry tremendously, and to every young and old in India. Whatever happened, its unfortunate," he told reporters outside the Parliament

"I hope that his temper will calm down. As far as BCCI action or the Wankhede Stadium is concerned, I think they should sit down and find a middle way out," he said.

However B-town came in full support for SRK, saying his whatever he did was justified and that any father would react like that.

Anurag Basu tweeted: "SRK's behaviour is completely justified, I'd have smashed their heads if it was my daughter."

Karan Johar tweeted that SRK is one of "the best fathers I know and protective about every child...he was being just that...a protective parent!!!"