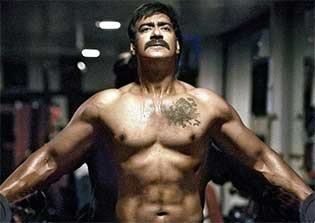 "Want to wish Rohit Shetty & Ajay Devgn & their whole team of Singham2 the best of luck. May u entertain us as u have been doing for yrs," SRK posted on Twitter Tuesday.

"Singham Returns" is the sequel to the hit film "Singham", which too starred Ajay. This time, he is expected to deliver a more power-packed performance alongside actress Kareena Kapoor, who plays his leading lady in the movie.

Co-produced by Ajay Devgn Films, Rohit Shetty Productions and Reliance Entertainment, "Singham Returns" is slated to release on Independence Day Aug 15. Its trailer is due to release worldwide Friday.

Ajay Devgn on setting a milestone in OTT space as producer: Tribhanga ...