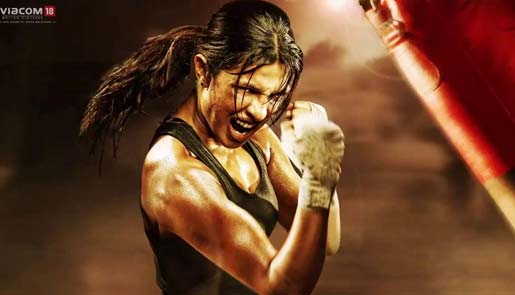 Bollywood film "Mary Kom" hit 1,800 screens in the country and raked in Rs.28.32 crore in the opening weekend with maximum collections from Delhi and Mumbai. The film is going houseful in Assam and Meghalaya, but the overall contribution to the box office earnings from the region is just one percent, said trade experts.

About Manipur's five-time World boxing champion M.C. Mary Kom, the film hit 72 cinemas in Assam and just two in Meghalaya. The footfall is overwhelming, but the total contribution is not much.

"The subject of the film is known and Mary is from the northeast, so naturally there are sentiments attached," a distributor from Assam told IANS.

"There were many students who watched it on the first day itself. In both Assam and Meghalaya, the shows were houseful. Many were left inspired and clapped in the end of the film too," he added.

The northeast region, made of eight states, also including Arunachal Pradesh, Nagaland, Manipur, Mizoram, Tripura and Sikkim, has a handful of operational cinema halls.

"The Assam government is trying to pull the crowds by exempting entertainment tax on 'Mary Kom'. But only one percent contribution was made to the domestic box office collection," said the distributor.

Assam's Ashiq Zaman, a government official, was lucky to watch it on the first day and he found it "inspiring", but he was not too convinced with Priyanka Chopra in the title role.

"Northeast states are hardly highlighted in mainstream cinema, so I wanted to see how they would present Manipur and its people. Priyanka has done well, but it was like watching Tom Hanks (Hollywood actor) playing Muhammad Ali (former African American boxer)," said Zaman.

"There were lot of Manipuri people in the audience. About 50 percent of the audience must have been Manipuri who are staying in Assam," he added.

Meanwhile, producers are trying to release the film in Kom's hometown, where around 60 to 70 films in Meitei language are made in a year. But Hindi films screenings are banned since early 2000 due to an insurgent groups' diktat.

"Manipur release was initiated earlier, but there was no positive response as Hindi films are not screened there. However, all efforts are in the direction of getting a theatrical release in Manipur," said a source from Viacom18 Motion Pictures.

Whether it releases in Manipur or not, the people in the state are certainly not going to miss it.

"Hindi movies are banned in Manipur, but there are so many CDs available in the market. If not theatre, people here will definitely get their hands on 'Mary Kom' CD like they do for other Hindi films," said Ningthoujam Nongdamba, a teacher.

Manipuris in the capital, however, are a privileged lot.

"I took an off and watched the first day, first show. Lot of people are saying that a Manipuri actress should've played the role, but had it been an unknown face from the state, it wouldn't have done well in terms of business. I liked the script. Women can learn something from it," said S.S. Kom, an HR executive.

PR professional N. Khayi from the state also managed to catch it in a theatre in the capital. He enjoyed the film, but he wanted to see more of Mary's struggle.

"Even the use of Manipuri language in the film was little weird because the words were not pronounced properly and non-Manipuris found it difficult to understand. And it wasn't shot in the state," said Khayi.

Despite the flaws, people from the northeast are simply delighted as for the first time a biopic has been made on someone from the region, which has helped people to understand the state is part of India.

The film has opened to positive reviews down south.

"It's a hit in the multiplexes, but not in smaller markets as audiences here favour watching a male superstar's Hindi film," said trade analyst Trinath.

"Maximum business is from Mumbai and Delhi. It should be able to earn Rs.45 crore in one week at least. The subject and Priyanka's performance are the highpoints of the film," said Rajesh Thadani of Multimedia Combines.