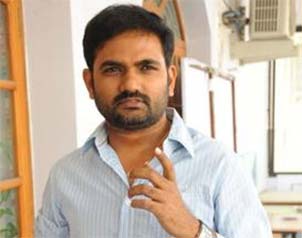 Telugu filmmaker Maruthi has rubbished allegations "Radha" story was stolen from a young writer and said the upcoming Telugu romantic-drama is his own creation.

"Following the allegations against me, I have submitted my script to the Writer's Association. Every line in the script is my own and I have not stolen it from anybody. These allegations are baseless and media should cross check before even writing about it," Maruthi told IANS.

"The association will decide if I have stolen my story or not. Even if they find any resemblance to the story of the other writer, I'm willing to makes changes. But I know that it won't be needed because my story is my own," he added.

Daggubati Venkatesh and Nayanthara plays the lead pair in "Radha" and this is their third film together post "Lakshmi" and "Thulasi".

Maruthi also clarifies that it is not a political drama.

"Venkatesh plays a politician who falls in love with a middle-class woman. It's not a political film, it is a romantic story with some political sequences to do justice to the character played by Venkatesh," he said.

"Radha" was launched recently and the shooting will start shortly.

Rushad Rana shares the story behind his separation