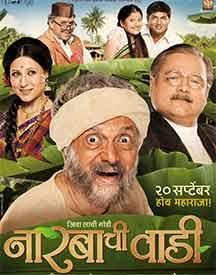 It will be screened in the Marathi feature film competition section at the fest which will run from Jan 9 to Jan 16.

The movie, under the banner of Film Farm Pvt. Ltd., stars Dilip Prabhavalkar, Manoj Joshi and Kishori Shahane and is directed by Aditya Sarpotdar. After making TV shows such as "Uttaran" and "Do Dil Bandhe Ek Dori Se " and ads for Pepsi, Hero Motors and L'Oreal, the banner forays into the feature film sector with "Narbachi Waadi".

"It's a great honour for us as our first major Marathi feature film has been selected for screening at the prestigious Pune International Film Festival. It has been our endeavour to offer world class content in various fields of media and we will continue to do so," Kalyan Guha, co-founder, Film Farm Pvt. Ltd., said in a statement.

"Narbachi Waadi" narrates the story of Narba, a simple man living in his 'waadi' in Konkan and his struggle to reclaim his beloved piece of property.

Thakkars and Gokhales compete to celebrate Krishna’s birthday on Sony ...

Nushrat Bharucha to Play the Lead in the Hindi Remake of Hit-Marathi ...

Parth Samthaan Travels Back to his Hometown in Pune!