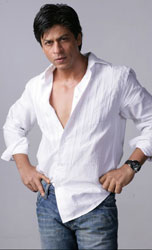 Featured Video
exists here but the impact of Bollywood is so strong that such cinemas remain unnoticed. But few politicians seem to be concerned about this fact and have decided to do something about it.


The buzz is that they are planning to approach King of Bollywood Shahrukh Khan for some of the Marathi movies as his presence in the movie can guarantee a good opening. Its also believed that the actor might not charge for acting in these movies.


Whether SRK is aware of this fact or not is not known but apart from him other Bollywood actors like Nana Patekar, Makrand Deshpande will be approached too. Since they are from the similar background will be keen to contribute to Marathi cinema.


Imagine guys if SRK chooses to go 'Me Marathi' way.