Manisha Koirala is the one reason why one would want to brave this prolonged homage to the cinema of Sanjay Leela Bhansali. 'Mehbooba' is a three-hour-long tribute to Bhansali's 'Hum Dil De Chuke Sanam'. The plot, ambience, characters, music and even the interactive interludes between the main protagonists are all derived with lip-smacking relish from Bhansali's film.

The melodies, if one may call them that, flit in and out like unwanted guests after every 10 minutes of dialogue. If the songs were sacrificed on the editing table, maybe Mehbooba would be more bearable in its old-world love triangle of two brothers ( 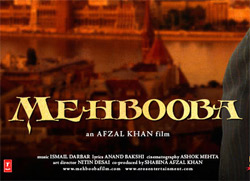 Featured Video
one idealistic and lovelorn, the other unscrupulous and ever-libidinous) who fall for the same girl.

The meat of the metier goes to the majestic Manisha - still resplendent and lovely no matter where and in what they put her. Manisha never fails to infuse a poetic aura to her character. Fetchingly photographed by expert lensman Ashok Mehta, at times Manisha looks as incandescent as she did in Bhansali's 'Khamoshi: The Musical'.

The inconsistencies in the narration are covered up with a lot of exterior gloss. To the director's credit, the film's scattered pastiche is woven into what can pretty much be described as a seamless yarn about two men and a woman who should know better.

The sets and locations are opulent, flamboyant and eye-catching. No subtlety is applied in the visuals or emotions. The song-and-dance numbers that come along with alarming rapidity are shot with an eye for unhampered opulence.

So who gets the girl in the end? That's a question that must remain in the audiences' mind. Beyond a point, we stop caring completely about these three compulsively conflicted characters, even though one of them is played by a star who brings in an element of the tragic and classic grandeur from an era gone by. And one isn't referring to either of the two male leads.

Ajay and Sanjay behave like the characters from Bhansali's 'Hum Dil De Chuke Sanam', discussing the same woman with each other ad nauseam as though she were two different entities.

The film goes back to the oldest traditions of Hindi cinema and emerges with a product that substitutes genuine emotions with elaborate props borrowed from a master storyteller's creative godown.