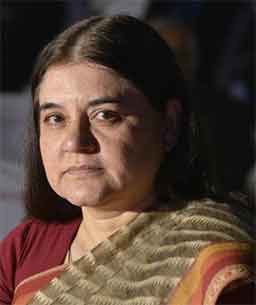 Bharatiya Janata Party leader and animal rights activist Maneka Gandhi Monday unveiled the trailer of Akshay Kumar starrer "It's Entertainment". She praised the film for being the first movie where animals were treated well.

"I think actors have much more power than politicians. They are role models of our country. This is the first movie where animals have been treated well and I am happy to be associated with the film," Maneka Gandhi told the reporters at the event.

"It's Entertainment" stars a dog as a protagonist and the title is based on the name of the dog - "Entertainment".

"When family keeps dogs, the scientific research says, the child in that house becomes 15 percent smarter at a young age. Next time I would prefer if you all use Indian dogs as they are much smarter," she said.

Farhad and his team strictly followed the guidelines before using animals in their film.

"We have shot the film keeping the guidelines in mind. We have used VFX, and graphics for a few scenes. Thanks to the new technology, this would not have been possible 10 years back," he said.

But Maneka Gandhi said that graphics that look unnatural and influence people in a negative way are not allowed as well.

As far as films are concerned, the former minister enjoys both Hindi and English movies.

She said: "I like seeing films, but I watch it on TV. The recent film that I liked was 'Insider'. I like watching Hindi and English films."