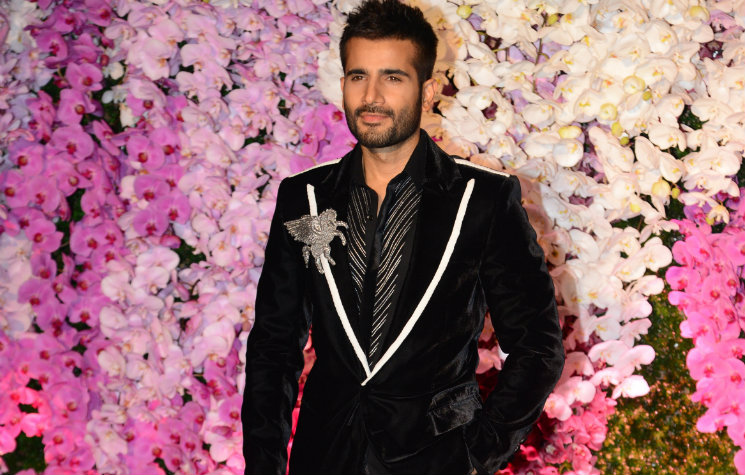 Manish's creativity is not just confined to women's festive wear but also to men's eternal classics, like the sherwanis, bandhgalas and staple suits. Manish is called a celebrity couturier for a reason, his designs are not just popular among B-Town ladies but is also graced by the likes of Karan Johar, Shahrukh Khan and more. And, The most recent being your Television hottie, Karan Tacker.

Although, this isn't the first time Karan wore a Manish Malhotra design but it definitely is the first time that he rocked this metallic flying horse detail blazer in the classic black and comfort fit checkered pants. So, last night among the bevy of A-list Bollywood invitees at Shloka and Akash Ambani reception, this Ek Hazaaron Mein Meri Behna Hain actor looked suave in a unique Manish Malhotra suit. He wore this casual chic suit at the city's shakiest shindig.

It wasn't just Karan who wore Manish's creations at the lavish reception party, many ladies from the industry also rocked his designs. Manish's popularity is not just confined to Bollywood, but the nook and corners of India also knows this designer.

What do you think about Manish Malhotra men's wear, is it as good as his women's collection? Let us know in the comments below...

Here's whom Karan Tacker wants to be in Lockdown with!

Karan Tacker Turns Into A Chef During Lockdown

Sooraj Pancholi Slams Reports of Affair With Disha, Link Up ...
6 minutes ago

"I Personally Feel that this is the Time for Us to Delve and ...
37 minutes ago

Karan Aanand prays for people who lost their lives Beirut ...
42 minutes ago

Kartik Aaryan receives a Massive hike for the remake of Allu ...
42 minutes ago

Parineeti Chopra, Arjun Kapoor, and many more celebrate ...
44 minutes ago

Close Sources Reveal What Happens on the Sets of Shamshera; ...
57 minutes ago