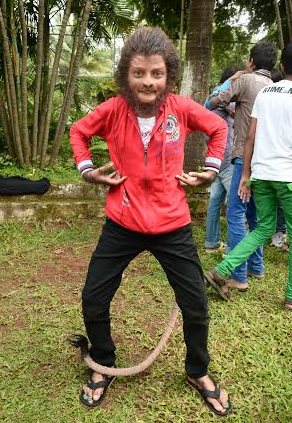 SAB TV's Baal Veer is very much famous among the kids and the show is acting like an asset to the channel. The makers of the show have struck the right chord with the audience to create a stir amid them.

Our source informs us, "In the upcoming episode of Baal Veer, the viewers will get to see Baal Veer (Dev Joshi) stuck with an extremely crucial task. Basically what happens is, Kalpavriksh tree (a tree known for fulfilling all the wishes) somehow comes on earth and Mehar (Anushka Sen) who is Baal Veer's friend unintentionally speaks something in front of the tree due to which Manav (Rudra Soni) turns into a monkey. She asks for a mistaken wish from the Kalpavriksh tree owing to which Manav turns a monkey. The entire sequence is shot very authentically and it is something that the audience will love to watch."

Well, this entire drama of the Kalpavriksh tree and Manav turning into a monkey will be hilarious which will leave the audience laughing out loud, haina?

the movie will rock :)

+ 4
9 years ago rofl half an hour...thats quick!!
Looking forward to the movie..