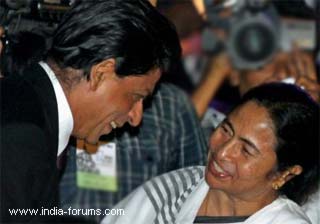 Kolkata, Nov 10 West Bengal Chief Minister Mamata Banerjee and Bollywood superstar Shah Rukh Khan Thursday provided some pleasant moments for shutterbugs and the audience at the inauguration ceremony of the 17th Kolkata Film Festival as they seemed to bond well and were almost overzealous in being courteous to each other.

Shah Rukh, who opened the festival at the Netaji Indoor Stadium alongside yesteryears actress Sharmila Tagore, began his speech by addressing Banerjee as 'didi' (elder sister).

But prior to that, while mounting the dais, the two stood at the aisle gesturing to one another to lead the way.

Banerjee, in her trademark cotton saree, was the first to reach the aisle, but stopped for Shah Rukh Khan, who was on the way. The Bollywood celebrity, wearing a dark suit and sporting a ponytail, rushed in, came close to Banerjee and then requested her to climb the podium first.

But Banerjee seemed more eager to give him the right of way. The actor reciprocated by moving his hand and pleading with the leader to ascend the dais first. But Banerjee, known for his bargaining skills, finally won. Shah Rukh climbed the dais before Banerjee.

Sitting on the dais, the two talked animatedly.

When the ceremonial lamp was being lit, it was Shah Rukh who gave a candle to Banerjee, who handed it back to him for doing the honours.

The ceremony over, Banerjee and Shah Rukh Khan held a meeting, where the chief minister reportedly asked King Khan to be the brand ambassador for Bengal.

Shah Rukh, on his part, said he would be available whenever Banerjee called him.