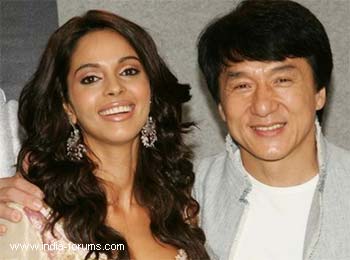 with whom she featured in "The Myth", at the ongoing 65th Cannes International Film Festival.

"Met my old friend Jackie Chan, was great to catch up with him, Will post pics soon," tweeted Mallika.

In 2005, the actress had appeared at the Cannes red carpet with Chan for "The Myth".

This year, it is Mallika's fourth time at the film extravaganza. This time she has been invited by amfAR - The American Foundation for AIDS Research. It is an NGO dedicated to the support of AIDS research, HIV prevention, treatment, education and advocacy.

Actors Ayushmann Khurrana and Chitrangada Singh might take centrestage as hosts of IIFA Rocks, a fashion and music night, to be held in Singapore as part of the upcoming International Indian Film Academy (IIFA) weekend and awards next month.

If sources are to be believed, the event will feature performances by Neha Dhupia, singer Mika and composers Vishal-Shekhar.

IIFA Rocks is held a day before the main awards ceremony.

This year, IIFA weekend and awards is being held June 7-9.

After cricket, acting a luxury: Preity

Actress Preity Zinta, who co-owns Indian Premier league (IPl) franchise Kings XI Punjab and has been busy cheering her team at the matches, is back to shooting, and loving it.

"Back on the sets of 'Ishkq In Paris'! The 4's n 6's, wide balls, etc of cricket are now replaced by panther dolly, Jib, Action, Cut of film. love being on set," tweeted Preity.

"Chilling and playing with my phone as Rekhaji (my hairdresser) is styling my hair! After cricket acting feels like a luxury," she added.