New Delhi, July 30 (IANS) The actors in Ekta Kapoor's epic soap 'Kahaani Hamaaray Mahaabhaarat Ki' say they had to hit the gym regularly and work out hard to suit their macho roles in the period drama.

Actor Ronit Roy, who plays Bhishma Pitamah in the new, technologically enhanced version of Hindu epic 'Mahabharat' claims no actor has been working harder than him to get into shape.

'I started with training for three hours a day and now I work out for about two hours every day,' Ronit told IANS over phone from Mumbai. 'I have worked extremely hard on my physique, in fact no body has worked harder than me.'

Chetan Hansraj, known for his well-toned, tall and broad body frame, plays the role of Bheem, considered the most powerful of the Pandavas. Even he vouches that Ronit worked really hard on his body.

'It took me almost four months of training and nutritional control to get into shape for the role.

'I have also been on a high protein, low carbohydrate diet. I had to stop my intake of cheese and rice and my diet mainly constituted of chicken with other supplements.'

Although he isn't much of a workout person, Chetan, who played the negative role of Sasha in 'Kahani Ghar Ghar Ki', had to drag himself to the gym.

'It has been very difficult for me because basically I'm a very lazy person,' he confessed.

Compared to other members of the team, model-turned-actor Aryan Vaid, who essays the role of Duryodhan, says he didn't have to work too hard.

'I haven't put in any special efforts in terms of physique, neither did I change my diet. I think I was already in good shape and I guess that's the reason why the producers cast me,' he said.

Aryan stressed that working out has become a daily habit for him now.

'I generally work out for one-and-a-half hours a day and I have been working out for the past 16 years. I really haven't done anything for 'Mahabharat',' he said.

Actor Harshad Chopra, who is also a fitness freak like Aryan, plays Arjun in the mega serial.

'I have always been a fitness freak. I work out regularly so my workouts have been more or less the same,' he maintained. Harshad said bagging the role of Arjun just motivated him to continue his workouts.

'This is like a new motivation for me to keep fit. I knew that I would have to appear semi-nude on screen for the role so I had to look good,' he said.

'Kahaani Hamaare Mahaabhaarat Ki' is one of Ekta's most expensive and lavishly produced shows on television with spectacular sets and designer costumes. It has an array of popular TV stars including actresses Sakshi Tanwar and Anita Hanssanandani. 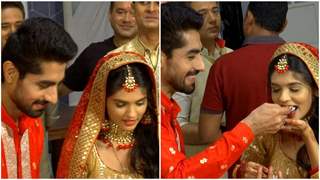