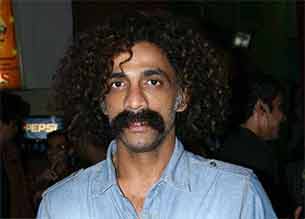 Actor-director Makarand Deshpande is all set to introduce Amjad Khan's daughter Ahlam in his film "Miss Sundari", a big screen adaptation of his play "Miss Beautiful".

"My play 'Miss Beautiful' is being converted into a film and Ahlam played her part really well in the play, so I couldn't think of anyone else...I don't know whether she is interested in pursuing her career with films as she has been attached to theatre for a long time," Makrand told IANS.

Made in Hindi, Makrand, however, says it's not a commercial movie.

"I have written, directed and produced the film. The film is ready and we are releasing it by March 2014. It's not a commercial film. It's a very niche and independent film. It's made on a very small budget," he said.

Ahlam has recently delivered a baby but Makrand says she may promote the film.

Kangana Ranaut tried to mock Deepika, Sara and Shraddha for ...
54 minutes ago