Does the much acclaimed Marathi play 'Kusum Manohar Lele' ring a bell? Well, that was the story of a woman in Pune named Sujata who went insane after her child was snatched away from her and the same story resonates in the show Main Naa Bhoolungi. Produced jointly by Beyond Dreams and Dancing Waters Productions for Sony TV the show has become popular for its gripping storyline.
As per our reliable source the story was earlier pitched to some other channel but then due to some delay in decision found its way to the makers of the show, and Yash Patnaik who has a good eye for great work developed it further. Says our source, "Main Naa Bhoolungi is based on the Marathi play Kusum Manohar Lele which itself is based on a Marathi novel is a true story which happened in Pune in 1986. The play tells the story of Kusum who gets married to Manohar Lele and they have a child. However, Manohar abandons Kusum and it is later found out that since he cannot have a child from his wife he plans all this just so that he has his biological child. Once his plan is a success he takes the baby and starts living with his first wife and refuses to recognize Kusum and ignores all her pleas."
"The play had veteran actors Sukanya Kulkarni and Sanjay Mone playing the role of Kusum and Manohar respectively. In real life, the victim of this tragedy is a woman went insane after reality hit her and had to be admitted to a mental asylum. The child is now a grown up man who has stayed with his father and step mother."
Even in the show we see that Sameer (Vikas Manaktala) gets married to Shikha (Aishwarya Sakhuja) and tries to kill her after they have a child. He then takes away the child and goes to stay with his wife Madhurima (Nigaar Z. Khan) to whom he is married for 7 years and now claims to be Aditya and not Sameer. 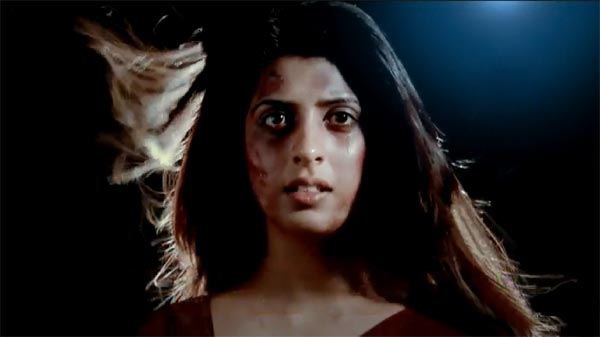 The show however seems to be taking a twist of its own from here and has mixed the story of a film too to generate interest in the daily show, adds our source, "Well in the show so far the story is similar to Kusum Manohar Lele but then to stretch the show and engage the audience the makers are adding more spice to it. If going by the looks of the show at present it looks like they are using the story of the hit film Khoon Bhari Maang too with Shikha who has a damaged face now will undergo a plastic surgery and soon make a glamorous comeback to teach Sameer a lesson."
The shoot for her comeback is to be shot tomorrow and is supposed to be a grand affair, "Shikha after her comeback will be seen in a modern, glam avatar and the story will move forward from there," concludes our source.
When called producer Yash Patnaik said, "Well I am not much into Marathi plays so I won't know much about it... you can talk to Virendra Shahaney since it is his concept." Upon contacting him, Virendra Shahaney denied ever seeing Marathi plays and said, "I don't know about the play but if you have to draw a comparison it has to be with the film Khoon Bhari Maang but having said that I would also like to add that we had no intention to adapt any story and are developing the storyline ourselves."
Well we just hope that the show which is a finite series and will end in the last week of June will be able to hold on to the audience interest and becomes a big hit just like the original play and the movie.
Seema Khot Mattoo
29 Likes

Sunset90 6 years ago If this is a real story, then my heart goes out for that lady. What a prick that man would have been to damage a woman like that.

The child, if he was grown up he should have chosen his real mother... and stayed out of the father's and step-mother's eyes. That would be my take on life.

I cannot even imagine what that lady would have gone through in real life.

PSharada 6 years ago All the best for this show. Finite Series is the way to go for Indian TV.

sunaina02 6 years ago The show has a good storyline . Thank God they are keeping the number of episodes pre-defoned . Hope that will keep the storyline taut.
Enjoying Vikas Manaktala's portrayal of the evil Aditya Jagannath

KoffeeLover 6 years ago Its sad that such an incident happened in real life. However the makers of the serial have made a big mess out of a promising storyline. It started off so well and since the whole pushing off the cliff track, the story has gone downhill. Even the acting leaves a lot to be desired. Hope they can make this as gripping as the start otherwise this will be another one of those Sony shows pulled off air abruptly. I am almost scared to watch shows on the channel.

sandiab 6 years ago shame thats sad that this actually happened in real life. bt got to say that this show is being killed by the writers they just ruining evrything with trying to be what i dnt know. they took the thrill out of this show. bt happy with the last 2 episodes

Vishalrx 6 years ago Oh gosh is it real story :( omg.. Sad to hear this

Ms.S.K. 6 years ago At the end of hindi play, the cast came on stage and producer+adaptation writer said this happened in real life and Kusum was still fighting to get her son who was a teenager at that time.
Bearing in mind I watched the play over 10 years ago

Shaina_b 6 years ago I knew that this show is inspired from Khoon Bhari Maang!!!!!

luvbbat 6 years ago It's really sad if it is based on a real life story. It makes me wonder if the biological mother really went insane or her husband had her committed to a mental asylum to get rid of her. Whatever it is, its just such a tragedy. that man along with his wife should be punished!

Urmila Matondkar Does Not Regret, But Ready to Apologise for ...
6 minutes ago

Shabana Azmi speaks about recovering from her Devastating ...
29 minutes ago

Who is AK in Sushant's Unseen Video that has Surfaced? Watch ...
33 minutes ago