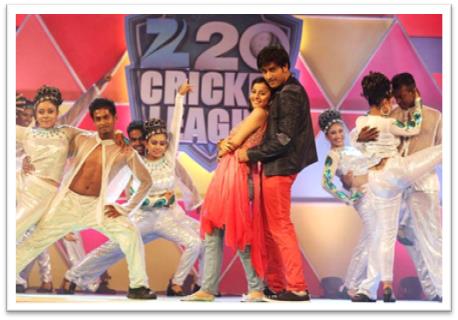 Being a non-dancer,  Zohaib struggled a lot to pick up his steps but much to his relief, his co-star in the show Mahima Makwana (Rachna in Sapne Suhane) came to his rescue and helped him with the dance steps. Interestingly, in one of the romantic sequence during their performance, Zohaib had to give a rose to Mahima and look lovingly into her eyes.

Since he was not able to give a perfect take, they had to give multiple retakes of this particular sequence over and over again! After giving numerous retakes of that shot, Zohaib jokingly mentioned "If we give one more retake of this romantic shot we both might fall in love". Everyone had a hearty laugh over this incident during the shoot!

He further adds "Being a non-dancer it was not easy for me to get the routine at one go like Mahima, but her guidance made it easy for me and because of which we could render a rocking performance finally. The response to our dance act was overwhelming at the stadium and we enjoyed shooting for it, I hope our viewers too enjoy watching it on television."

It was a role reversal for both the actors shooting for their act as in the show Zohaib's character is shown as Mahima's hockey coach and here Mahima was seen teaching him the steps.  Mahima who has done several stage performances earlier was rather quick in picking up the routine and with her timely help & his dedication, Zohaib too managed to get his act right.

Mahima says "I thoroughly enjoyed performing to a medley of some of my favorite songs at the Zee 20 Cricket League. All the actors of a television channel to be brought together to play a cricket match is something unique and  has not been done before. I am really excited to be a part of it and hope audience will love this cricket match with a tadka of daily soaps!"

In an exciting coup, Zee TV will have the most sought-after actors from all its prime time shows come together on a cricket field, be split into two teams led by Raj (Mishkat Varma) and Samarth (Navi Bhangu), the protagonists of  its show Aur Pyaar Ho Gaya' and battle it out in a nail-biting 20-over match packed with high-voltage drama. The man who wins the match will walk away with the heroine Avni (Kanchi Singh)! With half of your favorite stars backing Raj and the other half rooting for Samarth, wonder who will win the Zee 20 Cricket League and walk away with the girl?
18 Likes

Kikidramagirl 6 years ago Well no retake happened but atleast let them have more retakes for romance scene..well if there will be any. Mahima makwana and Zohaib siddique have sizzling chemistry!!