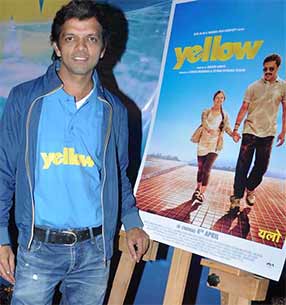 Not even in his wildest dreams did cinematographer-turned-director Mahesh Limaye imagine that his first feature film "Yellow" would create such a impact. The movie has been named for the Special Jury and Special Mention honours for the National Film Awards.

Limaye is completely taken aback by the force of his film's impact.

"Right now I am still coming to terms with what the film has achieved. It will take me a very long time to come out of the 'Yellow' impact," he said.

"Yellow", co-produced by Riteish Deshmukh, is a little film with a big heart about a specially-abled child.

Speaking about the wide impact of "Yellow", Limaye said: "We knew we were making a sincere emotional film about a specially-abled child and her relationship with her mother. The emotional strength was there inherent in the story. All I had to ensure was that I told the story as sincerely as I could."

"Though it's a film in the Marathi language, it's being watched by non-Marathi audiences. That, to me, is the film's greatest achievement. If we can make audiences watch a film in a language they don't speak or understand, we have achieved what art is supposed to do."

"Gauri's story could not remain region-restricted. Her saga is the ultimate triumph-of-spirit saga. We were sure it would have an emotional impact on the audience. We never knew it would reach so far."

Limaye, who has done the cinematography of many of Madhur Bhandarkar's films, including "Corporate", "Traffic Signal", "Fashion" and "Heroine", says his directorial debut was purely providential.

The director, who has suddenly come into renown gives all credit to producers Riteish Deshmukh and Uttung Hitendra Thakur for making "Yellow" happen.

"They believed in Gauri Gadgil and her story of how she overcame her disability to become an Olympian swimming champ. When I was asked to direct this amazing story, I felt a huge sense of responsibility. It was as though I was being told by invisible powers to put forward a story that would inspire generations."

"Throughout the making of the film I felt the same power guiding me. In that sense, 'Yellow' just happened on its own. I am just a tool," he said.

The subject required four months of intense research. Directing a specially-abled actor in the lead role was not easy either.

Limaye says his long experience as an ad filmmaker really helped him to get a grip on the situation.

"When you direct an ad you learn to tell a story quickly before the lights fade and the actors lose their concentration. In my 20 years of experience as an ad maker, I've frequently worked with kids. They are to be handled with great patience and sensitivity."

"I guess those 20 years of experience in making ads prepared me for this big challenge that was 'Yellow'."

Now he wants to make a love story next.

"It doesn't matter which language the characters speak, as long as they speak the language of the heart."

Fukrey 3 Team Kick-starts their Work ahead of Shooting; ...
21 minutes ago