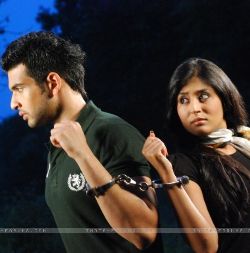 Apparently, misunderstandings have mounted between Arjun (Karan Kundra) and Arohi (Kritika Kamra) in Imagine TV's Kitani Mohabbat Hai - 2 and therefore in the previous episodes we saw a rude avatar of Arjun as he refuses to take Arohi along with him even after getting married to her.

The story proceeds as follows..

Though it was also stated that Arohi will be sent to Canada as she won't be allowed to stay with Singhania's, Arohi too will be firm with her aim to take a revenge against Arjun.

Putting more light on the track our source adds "Eventually Arohi will succeed in getting into Singhania's house and will initially behave like a typical Bahu. But  with the intention of revenge against Arjun, Arohi  will change the phase gradually and will literally give a shock to the family members during the ceremony of Muh Dikhayi which will be organized by Arjun's Dadi. She will appear in front of everyone as a brat in a very wacky avatar."

"Her weird appearance, filled with attitude and proud, will shock Arjun, after which Arohi  will not leave any chance to portray herself bad in front of Singhanias," adds source.

We contacted Karan Kundra but was reported to be busy.

But Kritika Kamra tells, "Yes, there is one hour episode of the show on this Saturday and audience will get to see a new Arohi in all."

Not only Arjun but the audience will too get a surprise to see Arohi in a wacky avatar!

The one hour long episode will be aired on 22 January at 8:00pm on Imagine TV.

10 years ago Want another mahaepisode soon:D
Hehe..no..we know how much hard u guys have to work for that:)