New Delhi, Nov 29 (IANS) Bollywood actress Madhuri Dixit's two sons enjoy their mother's work so much that when it came to selection of her much awaited comeback vehicle 'Aaja Nachle's' title song, her youngest son Ryan gave the final nod.

'I had gone to the studio with my two sons -- Arin and Ryan -- to select the title song among various options. As soon as both my sons heard the number they were mesmerised and Ryan started dancing,' Madhuri told IANS. 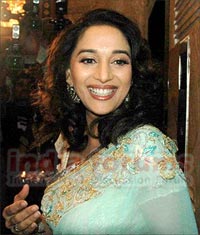 Featured Video
oked at each other and said 'this one is going to be a chartbuster' and by God's grace people are liking the song,' she maintained.

The versatile actress, who ruled Bollywood for more than a decade, said that her sons love to see her dancing on screen and all the media attention they are getting.

'My kids are thoroughly enjoying all the media attention. They are never tired of seeing me dancing on screen. Whenever they see the trailers of the film on television they start dancing. And Ryan, who is just two-and-a-half years old, urges 'dance mommy dance'.'

And how did husband Shriram Nene react when she decided to return to filmdom?

'There was no reaction from him. We both discussed and talked in detail about how we would work it out.

'And after watching the film he said he liked it, as it is clearly visible that the effort made by all of us is genuine. Also, the audience can relate to the characters,' she said.

Madhuri, who last appeared in Sanjay Leela Bhansali's 'Devdas', is playing the role of a choreographer in her forthcoming film.

To appeal to the evolving taste of the Indian audience she did a lot of preparation before making a comeback.

'I used to work out four times in a week to get back in shape, as after having two babies I had put on a lot of weight. However, I have always been a health freak so it was not very taxing.'

Commenting on the secret of aging gracefully she said, 'It's a mind over matter kind of thing. I just don't think about age. I still feel young. And to do away with the lines be vice free, do yoga, meditation and eat healthy.'

The Dhak Dhak girl, as she is popularly called, said she would take up only those projects that would be completed within a strict time frame.

'Currently I have only this film in hand and I have not thought of anything else yet,' said the star who has given hits like 'Tezaab', 'Dil', 'Beta', 'Khalnayak', 'Hum Aapke Hain Kaun' and 'Dil To Pagal Hai'.

'Budget is not that important, I would do a film only if the script is good and it gets completed in a fixed time frame, as I have a family to look after now. At no point in time will I compromise on that.'