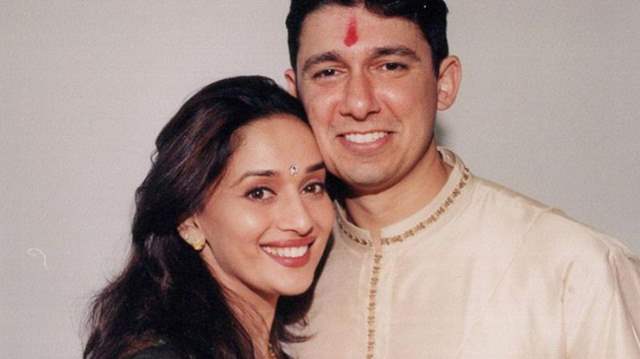 Madhuri Dixit is one of the most loved actresses of the country. She enjoys a massive fan base and all her fans just swoon over her charm and elegance.

Today as the Hum Aapke Hai Koun actress marks 23 years of her marriage with Dr. Shriram Nene, the latter took to his Instagram handle and wished his beloved wife with a lovely note.

Dr Nene shared a throwback picture of the two. In the pic, Madhuri is seen decked in a green saree, with golden jewellery on her neck and lots of bangles on her hands. She is clutching Shriram’s hands while posing for the camera. Dr Nene is decked in an ivory kurta.

Sharing the picture he also penned a beautiful note for Madhuri that read, “Love is composed of a single soul inhabiting two bodies. -Aristotle. Happy 23rd Anniversary to my beautiful wife aka my heart, my soul, and my life! Every year my love for you keeps growing as we continue together on this wonderful journey of life. I am so grateful for you and the life that we have built together. Here’s to many more years of love, happiness, and adventures. I love you so much babe! Anniversary #WeddingAnniversary #Soulmates #BestFriends #23YearsOfTogetherness”

For the uninitiated, Madhuri and Shriram Nene tied the knot on 17th October 1999 in Southern California. The couple welcomed their first child Arin in 2003 and then Ryan in 2005.

Post her wedding, Madhuri took a break from acting and made a comeback with her film Aaja Nachle.

Recently she was seen in the AmazonOriginal film Maja Ma. The film was released digitally and received rave reviews from the viewers. Madhuri was highly lauded for her performance, especially her dance in the song ‘Boom Padi’.