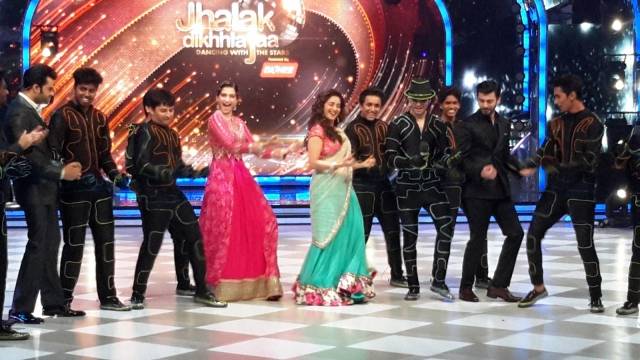 The popular dance reality show Jhalak Dikhhlaa Jaa Season 7 on Colors is heating up and has entered in its 14th week. As the five contestants are vying for the title, they are leaving no stone unturned to woo the judges as well as the guests making their appearance on the show.

This time the viewers will see marvelous Sonam Kapoor and dashing Fawad Khan making their presence felt as they are coming on the stage to promote their upcoming film Khoobsurat.

According to the sources, "In the upcoming week of Jhalak Dikhhlaa Jaa Season 7, Sonam will be get impressed with Karan Tacker's performance and will join him on the stage for the hit number Tamma Tamma Loge from the film Yalgar."

Well, it will be interesting to see all performing on the hit number Tamma Tamma Loge on the stage of Jhalak Dikhhlaa Jaa Season 7.

starsshinex 6 years ago My two favourites: Karan Tacker and Fawad Khan together!

What more do I need? Excitedd!

MyKryan 6 years ago Can't wait more to see you performing as there is a talking that you rocked this week...
Love u tacker..
Rock the stage

KiranSonu1 6 years ago Cnn't wait for dis... Karan Tacker u rox.
Wo Mashuri & sonam danced with u.

nupurdas1 6 years ago Wow Cann't wait for it. Sonam will dance with Karan Tacker love u Tacker.