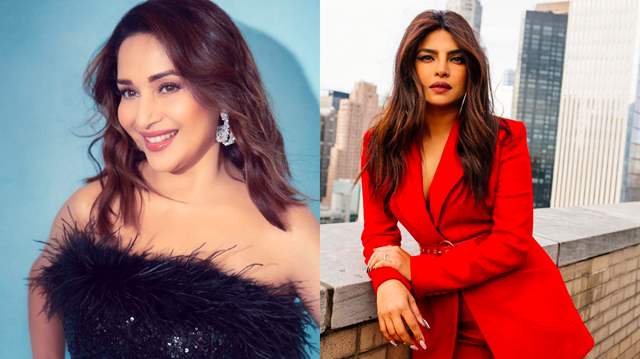 Madhuri Dixit, who is now earning praise for her first Netflix series The FameGame, has stated that the American series based on her life, which was funded by Priyanka Chopra, is no longer in the works.

The Desi girl had stated in 2017 in Variety that she has joined as a producer for an American comedy series based on Madhuri Dixit's life. Sri Rao, who recently helmed The Fame Game, was set to write and direct the series. The programme was supposed to be about Madhuri's life in the US suburbs after she gave up performing and married Dr. Sriram Nene.

However, Madhuri said in a group interview, as reported by Indian Express presently, that the series is no longer taking place. She stated that there were continuous negotiations about the show, and that Sri Rao had also worked on the screenplay. However, it was not authorised. She stated,

"We were pitching it, and Shri Rao, the director of The Fame Game and the writer of the show's script, was also engaged. But things don't always function as they should. We attempted unsuccessfully to have that show authorised."

Furthermore, she clarified that the show was not meant to be her autobiography, but rather a part fiction, part reality series that shed light on key events in her life when she relocated to Denver, where no one recognised who she was. Madhuri, on the other hand, affirmed that it is no longer happening. She stated saying,

"It is finished, and we are no longer working on it."

Meanwhile, Madhuri has made her OTT debut recently with The Fame Game that also stars Sanjay Kapoor and Manav Kaul. The series is streaming already and it has opened to great reviews. Fans of Madhuri were eager to see her back on the screens since they last saw her in Karan Johar's film Kalank.