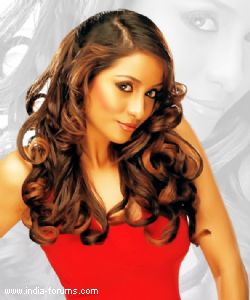 Madhura Naik met with a freaky accident on Christmas eve which has left her in complete shock. The actress however was lucky and escaped without any major injuries.

We hear that Madhura was going home after shooting for her Balaji Telefilms show Pyaar Kii Ye Ek Kahaani in a car when the driver accidentally got on to the divider and the car went and collided against an electric poll the very next second.

Our source from the sets of the show says, "Madhura is busy studying for her exams, and in order to make things easy for her, the production house has provided her with a car and driver. On the eve of X'mas, she was returning home in the car when this accident took place. Luckily, the place where they collided was just opposite to Kokilaben Hospital. The driver fled the place as soon as the accident took place, but Madhura was spotted inside the car and was helped by passers-by who admitted her at the Kokilaben Hospital. The actress was kept under observation for many hours, as she was in an unconscious state".

When contacted,  Madhura told Tellybuzz, "Yes, I met with an accident recently. It happened when the driver at the speed of about 80kmph drove on the divider and then hit against a poll. I was sleeping at that moment, and knew about it only when the car collided and turned upside down. I was unconscious for a while, and was taken to the hospital immediately. I have suffered a shoulder dislocation, and many bruises. I am getting discharged from hospital today, but I have to rest for at least a week".

We hear that the car which is owned by Balaji Telefilms has been damaged severely.

10 years ago it's good to have u bck on the show. really glad to c u are doing fine.

10 years ago Get well soon Madhura!!! and good luck with your exams...

10 years ago Hope you get well soon.
May God bless you.

10 years ago get well soon..... lucky girl god save u from big accident

birthdeath 10 years ago Aw shez a student? nice but that is scary though. get well soon madhuraaa lol