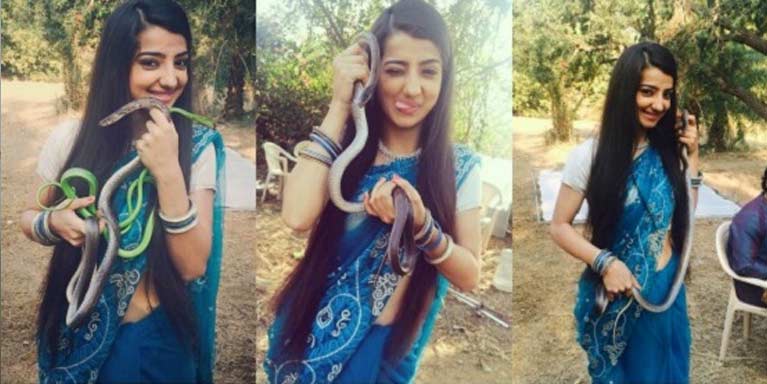 Pretty and popular actress Lovey Sasan, who is currently seen essaying the character of Paridhi in Star Plus' popular show Saath Nibhana Saathiya is personally a big time animal lover and an adventurous person too.

Recently, the daring girl enjoyed playing and clicking pictures with snakes during her shoot. Lovey loves animals a lot and she never gets scared of playing with them. TellyBuzz spoke to Lovey to know more about her experience of playing with the snakes and also to know about her adventurous side.

Lovey said, "I was super excited because I always wanted to touch a snake and feel it. I am an animal lover and I have a pet dog at home. I wish to see and touch a Lion and a Tiger too someday (laughs). This was the first time, I had touched a snake. People on the sets were telling me not to touch the snake but I still held them and got my pictures clicked with them. I didn't have any scenes with the snakes but my co-actors who had to shoot with snakes were very scared but I was enjoying playing with snakes. I never get scared of such things. I enjoyed my shoot and played with the snakes a lot."

Lovey, who loves to try out different kinds of adventures further reveals, "I love doing stunts on my own too. Recently, I had to shoot a stunt scene and someone jokingly asked me on the sets whether I can do it on my own and I said, "Yes" and I did it. I wish, I get stunt based scenes in future as well."

9 years ago Ali Zafar ..congrats..
want to watch the movie as soon as I can..
keep rocking!!

sama12 9 years ago really loved the movie..
l like the end part..tthr is nt much ronaadhoonaa like tipical other bollywood movies..
both rockss especially Ali

9 years ago This movie was much better than the recent modern rom-com ek main aur ke tu, which was very one dimensional if you ask me.

+ 2
9 years ago HAvent watched da film but know dat Ali is a fine actor altho I dunno abt Additi. congratz to da team for havin dun so well and Wishing dem all da best ...