After the hit score of 'Jab We Met', director Imtiaz Ali has collaborated with Pritam yet again for the music of Saif Ali Khan's production debut 'Love Aaj Kal'. Pritam has left no stone unturned in creating soulful melodies. 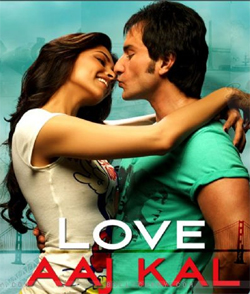 Featured Video
remixes in the soundtrack.

'Aahun aahun', which has an electrifying start with the strumming of the guitar, is an amalgamation of a hit Punjabi pop song by singer Jazzy B and the Hindi song composed by Pritam. Sung by Neeraj Shridhar, the song keeps juggling between the two genres and is very entertaining. It sets the mood by mixing both Indian and western influences. 'Aahun aahun' will surely be a hit.

The number also has a remixed version, which will become a favourite on the DJ consoles.

Up next is a beautiful rendition in Rahat Fateh Ali Khan's voice. 'Aaj din chadeyya' starts with a small alaap. A romantic song that is extremely soothing to the ears, 'Aaj din...' strikes a chord with the listeners. The song has a feel-good factor.

With brilliant vocals by Sunidhi Chauhan and Neeraj Sridhar, the next song 'Chor bazari' starts with foot-tapping, peppy music. The lyrics are not the highlight of the song, but the number has the potential to impress music buffs.

This too has a remixed version, which is quite average.

KK makes his presence felt with fast-paced song 'Main kya hoon', which is enhanced by electronic and psychedelic beats.

With the next song 'Thoda thoda pyar', the Punjabi flavour takes precedence. Sung by Sunidhi Chauhan, it has a folk touch to it in places. But it might not go on to become a chartbuster.

Neeraj Sridhar returns with 'Twist', which is intermingled with the song 'Ek pardesi mera dil le gaya' from the 1958 film ' Phagun'. It's a dance number that is high on beats.

The remixed version, however, is better than the original.

Finally we have Mohit Chauhan crooning the song 'Ye dooriyan'. The song is just about passess muster, but Mohit's vocals are the highlight.

On the whole, Pritam has done a good job with the soundtrack and created songs that are sure to become hits.