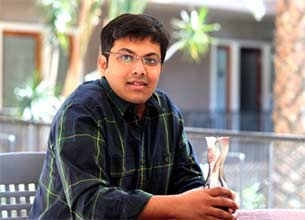 Sound in Indian cinema has improved in the last few years, but it is yet to embrace the use of live location sound, says sound designer Kunal Rajan, who has worked on international films and is currently busy with Kamal Haasan's magnum opus "Vishwaroopam 2".

"I feel that sound in Indian cinema has improved immensely in the last three years, but since dubbing the voices in a film is the most common practice, we still haven't adapted to the use of live sound on location," Rajan, who had also worked on "Vishwaroopam", told IANS over phone from Los Angeles.

"I feel this is one area where filmmakers in India need to make an effort," he added.

Rajan, born and raised in Puducherry, is of the opinion that "sound in Indian cinema may have changed from a filmmaker's as well as an audience perspective, but no matter how well you dub your lines, there is a certain quality of live sound that can never be achieved with dubbing."

Having worked on Hollywood films such as "Fantastic 4: Rise of the Silver Surfer", "Blades of Glory" and "The Spiderwick Chronicles", Rajan is also finishing up a Nigerian film entirely shot in Nigeria with a Nigerian crew.

"It had amazing location sound," he said, and adding: "I can understand the challenges in India considering the loud traffic and actors not always speaking the language, but I am hoping this is one aspect of sound that will change over time."

Rajan holds a bachelors degree in sound from a Singapore institute. He believes that involving a sound designer from the scripting stage of a film helps to add creativity to its sound department.

"It's always great to get involved in a project right from the scripting stage. At that stage, you can really get into the roots of the story and come up with some really creative sound design ideas, which would enhance storytelling," he said.

"A sound designer can discuss ideas with the director even before he or she has shot the film.

"This could affect the way the director would shoot a film. It could be something as small as a shot of a window banging against the wall in a horror film, the sound of which a sound designer could use throughout the film if established once visually," added Rajan, who started his career with short films.

Thus, his advice to filmmakers is to give equal importance and preference to sound in cinema.

"All filmmakers should take the time and effort for doing a proper sound Job for their film. Sound is the last process of a film before the release. This is the time where you will have no time or money and because of this many tend to overlook the importance of sound," he added.

In the past, Rajan had also worked on Indian films such as Rajinikanth-starrer "Enthiran" and Aamir Khan-starrer "Ghajini" besides Hollywood films, but he said the most challenging project was "Vishwaroopam".

"Not only was it a two-and-a-half-hour-long action movie but also was shot in two languages, Tamil and Hindi. Although a lot of scenes were similar, they were not exactly the same. It was like doing almost two movies individually," he said.

Also, working on the film with Kamal Haasan was an "unforgettable experience", and he has now also worked very closely with the actor-filmmaker on "Vishwaroopam 2", slated to release next year.

"Working with Kamal Haasan and seeing him explain what he wants, his energy and his innovative ideas made a lot of difference to the output. He is one of the most brilliant filmmakers I have ever worked with and his energy and enthusiasm made the whole experience not only inspiring for me but for my entire sound team, he said.

In the future, he wants to produce films in India as well as the US.