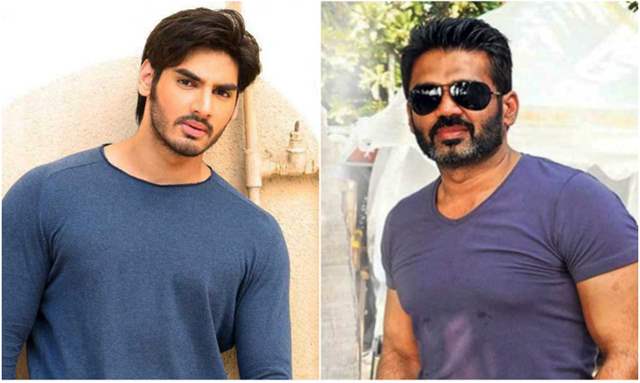 Sajid Nadiadwala and his Production Nadiadwala Grandson Entertainment have given some of the most incredible actors to the industry, and from that platoon, Suniel Shetty too had his break with their backing.

Not many people know, Suniel Shetty first sealed the deal with Sajid Nadiadwala for the film 'Waqt Humara Hai' but his second film  'Balwaan' hit the screens first. Today, almost 28 years later his son Ahan Shetty is making his debut with his 'Tadap'. The film fraternity along with the audiences have poured in all their love and good wishes for the actor.

Nadiadwala Grandson took to their official handle to share, "Presenting the next #NGETalent to the world @ahan.shetty ?? Can’t wait to witness the magic you’ve created on the Big Screens!

Celebrities took to their social media to welcome Ahan Shetty to the industry and wish him luck for what looks like a blockbuster already.

Starring with the actors who presented the poster, Akshay Kumar wrote, "Totally nailed the angry young man look here, looking forward to watching you on the big screen. Sending all my love and best wishes for #Tadap, in cinemas on 24th September.

Ajay Devgn shared, "This is Emotional. Ahan has grown up so quickly! ?? Heartiest congratulations to @SunielVShetty for #AhanShetty’s first film. Happy that he’s in the capable hands of Sajid Nadiadwala & Milan Luthria. ?? Watch #SajidNadiadwala’s #Tadap on 24th September in cinemas ??"

Salman Khan wrote, "Ahan wish u all the best n success may all your hard work, discipline n dedication pay off. The tadap of hard work should never die ... @nadiadwalagrandson @ahan.shetty"

Anil Kapoor took to his handle to share, "Have been waiting to hear this news for awhile now! Congratulations @SunielVShetty!! I am sure that #AhanShetty will make you just as proud as @theathiyashetty has! Wishing him all the success & love for #Tadap!!"

Abhishek Bachchan expressed," Proud day! From playing football with you as a baby on the sets of Refugee to seeing you make your debut... keep growing and conquering! All the best #AhanShetty and the the entire team @milanluthria @TaraSutaria #SajidNadiadwala"

Sharad Kelkar shared, "Love you Ahan??! Looking forward to watch this on the big screen on 24th September! Lots of love and best wishes to the team #Tadap.

With so much love pouring in just a matter of hours and the spectacular first look of Ahan has added to the hype, the actor is surely riding on high expectations.

1 months ago But fl is looking beautiful

1 months ago Another product of nepotism. Bollywood has become a family business now.