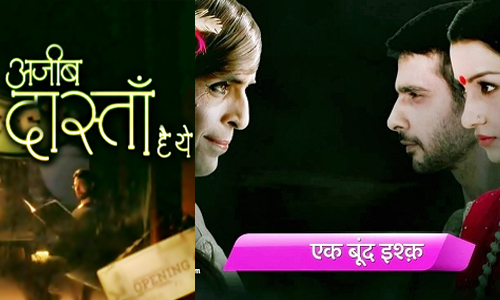 As Life OK is set to transform its programming schedule with many new shows in the pipeline, the latest development which will disappoint the loyal fans of Ek Boond Ishq is that the show will be replaced by Rajshri Productions' upcoming show Meri Rang Mein Rangnewali. The show will acquire the 8.30 slot. Yes the show's star cast which has shot its major chunk will go on floor in the next month.

According to the sources, "Ek Boond Ishq could not live up to the expectation of its viewers and so the decision was taken to pull the plug on the show. The show has been given the final intimation to wrap up the show by first week of October."

Further our source continues, "The time slot of the show Tumhari Paakhi produced by Shashi Sumeet Mittal will be changed to 9 instead of 9.30 and Balaji Telefilm's upcoming show Ajeeb Dastaan Hai Yeh starring Harsh Chhaya, Sonali Bendre and Harsh Chhaya will take the time slot of 9.30."

Well, with the sudden development we hope that the shows strike a right chord with the audience.

jasmeet92 3 years ago I like this movie and it is entertaining movie and Ali Zafar and Imran Khan's performance is fantastic and Katrina Kaif looking stunning in the movie and music of the movie is too good.

croziaxx 6 years ago This show should have ended long ago..even before leap.. they had no idea how to proceed .. but drag and drag unnecessarily..they never showed a proper story of tara and MJ.. people did only wait for their happy life but that never came.. they never used an actor's ability like Viraf he was fantastic in Kismat but alas..in this show they covered him as an enigma..which never solved..hero,heroin seeing to each other only..and viewer wait when this hurdle comes to an end..

Vartika07 6 years ago I am happy & excited about ADHY but after knowing that it is of Balajee can't say anything. Sad news for EBI fans. It was a good show n better than many more!!!!!!

Badtameez_Dil 6 years ago Well If EBI characters & EBI wasnt unique i wonder maybe kitchen politics have more unique character where lead hero is standing at bk giving a reaction on Saas-bahu topics that must be unique char.
heroine marrying someone else bringing new lead actor or hero marriage 3 times with different characters or some randam kitchen bhabhi doing nautanki would be different to watch or saas-bahu fights over son/husband must be very different...
ohh some whole episode over how to clean utensils would be appropriately different or doing a drama over how heroine made a kheer would be epic one to watch...
these very different to watch rather than characters like Kalawati or Tara who didnt cried became abla naari showcased herself...
or char like Mrityunjay who didnt stand up behind saas-bahu giving expressions...ws rather went to different emotions of his own way...

Yes while LIFE OK channel is concern Ek Boond Ishq gave them equal ratings without a single promotion of the show infact with was in competition of 1st position as per what Channel deserves in its ratings..in 1 yrs run there were hardly 10 promos of the show while there beloved TP overly run promos of its shows on every damn channel than also EBI gave its ratings all due to its Viewers love for the show...
how can u say this...if u dont get check the ratings till june...without promotions still if ratings didnt went down they took the only plan which they even take before also to kill any show is the Leap...Infact now also what GD & TP ratings EBI is having same ratings than how GD & TP were more given a marginal difference is what talking about than in 3 weeks these two shows have mahaepisodes than also couldnt manage to grab eyeballs with its promotions...

JayashreeV 6 years ago Ek boond ishq is the unique story it never received any encouragement from the channel and their telling that it never fullfilled the exceptations of the fans. lifeok is a curse channel and it will never reach its height their going to shutdown the channel quickly...EBI rocks always.

Divya429 6 years ago Ekboondishq was the only unique show in Lifeok ,bt channel nver PRed it properly still EBI gave the same trps as other well PRed shows of Lifeok...
though heartbroken with EBIs end feeling happy that Mrityunjay & Tara didn't end up marrying other people like the female lead of TP.
Surpised to know that fans who couldn't take leap of EBI is happy seeing Pakhi with another man in TP..

..PlayfulKiss.. 6 years ago They should instead end Tumhari Pakhi which has become a crap now!

adigaag 6 years ago Interesting promo! Waiting for it eagerly.

luvbbat 6 years ago Tumhari Pakhi is an amazing show and it does not matter what time slot it gets on the channel, we would not miss it. Thank you Life OK for this show!

Aishwarya-Aaradhya-Amitabh are the Major Reason behind Abhishek ...