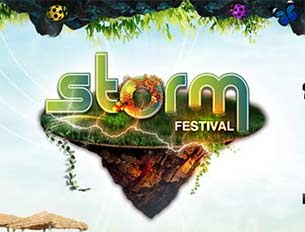 Indian independent artist Leslie Lewis along with young singers such as Siddharth Mahadevan, Shivan Mahadevan, Alisa Mendonsa and Divya Lewis breathed life into the audience with their performances at the ongoing Storm Festival.

Storm, India's one-of-its-kind camp-out music festival, which brought forth over 60 artistes to perform under one roof this year, kicked off Jan 31 and will conclude Sunday.

"I have seen these youngsters grow, have jammed with them on several occasions but this is first time we are performing on stage. This will be a preview of the album we are putting together," Lewis said before introducing the young artists.

While Lewis performed several of his own compositions, released and unreleased, such as "Raat chandini" and "Krishna nee bega baro", he later on collaborated with all the young singers, including his daughter Divya Lewis.

The crowd cheered in unison for Shankar Mahadevan's sons, Siddharth and Shivan, while performances of Alisa and Divya were equally appreciated.

On Sunday, bands such as Anthony Daasan and Yen Party and Indiva as well as independent artists Suheela Raman and Raghu Dixit Project will perform.

Music lovers will also get to experience the first-time collaboration of Shankar Mahadevan and Shankar Tucker.

Shankar Mahadevan is Surprised by the response received by Bandish ...

Bigg Boss 14: Abhinav Shukla and Rubina Dilaik to be a part ...
19 minutes ago