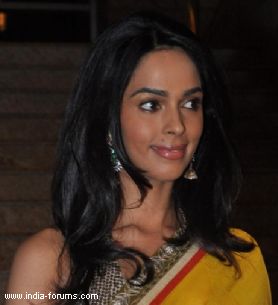 Bollywood actress Mallika Sherawat is not pleased with her link-up with Hollywood actor Antonio Banderas. After being held responsible for his split from wife Melanie Griffith, she says don't pry into her personal life.

Mallika, who entered the Indian film industry in 2003 with "Khwahish" , was recorded on video dancing with the "Desperado" star during a party in Cannes two years ago.

"I remember when they danced and they had a lot of PDA (Public Disply of Affection), he had a lot of public affection with Mallika," Los Angeles stylist Ivan Bitton was quoted by radaronline.com as saying.

"He was saying 'God you're so beautiful,' like a horndog would do talking to a prey," he added.

After the report, the "Murder" actress tweeted, Thursday: "LEAVE ME ALONE!"

When contacted by another international site eonline.com on her relationship with Banderas, who along with Griffith recently announced that they were ending their marriage after 18 years, Mallika said: "Antonio Banderas is a wonderful man, a great dancer and an acquaintance of mine."

"I did not go on any vacation with him, and I'm sorry he's going through a divorce," she was further quoted by eonline.com.

She went on to say that Bitton was hired only for the international film festival.

"Ivan Bitton is not my best friend. I hired him as a stylist at Cannes and then fired him. I'm sure he released the video.

"I don't know what he's even talking about now. I haven't been in touch with Ivan since I fired him. Whatever he's saying about me is ridiculous," she said.

Hailing from Rohtak in Haryana, Mallika went international with Jackie Chan-starrer 2005 film "The Myth", and then did Jennifer Lynch's "Hisss" and William Dear's "Politics of Love".

After revealing relationship, Shireen Mirza gets proposed by boyfriend ...

Our Friend Review: A worthy-watch for all the BFFs, who never choose ...