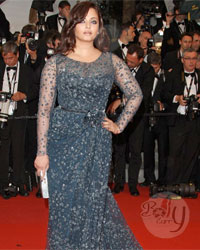 Actress Aishwarya Rai's post pregnancy weight gain is the talk of the town, but fans aren't happy with the debate and urge everyone to leave her alone.

A poll conducted by Yahoo showed 64 percent of the respondents have urged people to respect her privacy and leave her alone, while 36 percent felt Aishwarya needs to lose weight.

The actress gave birth to daughter Aaradhya, her first child with actor Abhishek Bachchan, in November last year. Post delivery, she has gained weight, which doctors say is natural, but people are critical.

The actress recently made an appearance on the red carpet of 65th Cannes International Film Festival as a brand ambassador of L'oreal Paris. She also attended amfAR (The American Foundation for AIDS Research) dinner held at the Cannes, which helped raise funds for the fight against AIDS.