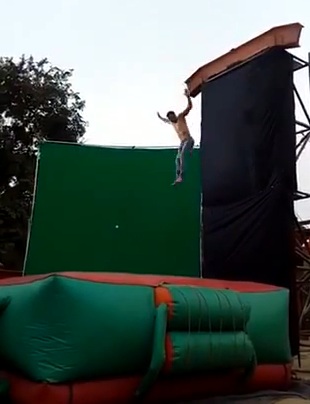 Actor Gautam Rode was injured last week on the sets of Mahakumbh when he was performing a stunt. The actor was jumping from 28 feet height in which he had injured his back, leg as well as his chin and gotten 8 stitches.

Latest buzz is that the video of the injury has gotten leaked by a fan. The video shows Gautam jumping and the chaos post his fall.

The promo of the show had gotten released digitally a few days ago and the show is already causing a stir in the digital medium as everyone has been buzz about the shirtless avatar of Gautam Rode.

We tried contacting Gautam to reach him regarding this video as well as injury but he remained unavailable.

Check out the video here -

bestones 6 years ago get well soon our super star gautam rode you are best actor :)

+ 5
6 years ago Lol there is nothing visible in vidio.what's wrong with IF . Loading such foolish vidio !!

6 years ago Gautam Rode, I hope you are in good health. Take care and all the best for MK.

6 years ago Rock Star Gautam Rode, I hope you are fine. Waiting on MK.

redfoxx 6 years ago Gautam Rode hope you are doing great. Waiting to hear you on Anu show tomorrow. Good luck for MK.

Rodeforlife 6 years ago Gautam Rode be careful and take all the safety measures in the future.

6 years ago Gautam Rode I hope your weekend was restful and you are much better. The second poster of MK is fabulous.

Rodeforlife 6 years ago Gautam Rode wishing you a speedy recovery.