View Profile
Lata Mangeshkar's divine voice was last heard in Rang De Basanti,Veer Zara and Page 3. After that she took a self imposed break from commercial film songs. Occasionally she agreed for a bhajan. Although every month she is flooded with hundreds of song offers, it took her four years to say yes to a film song. 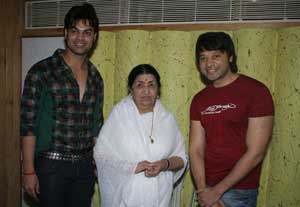 She is singing the title track of Sunjay Sharma's Dunno Y.. Na Jaane Kyun. Kapil Sharma who is the actor and writer of the film still can't believe his dream of Lata ji singing for his coming true. When Nikhil the music director of the film presented Kapil the composition of the track Kapil's instant reaction was a wish that Lata ji would sing this song. He told Nikhil he needs to make some really good film so that one day he is good enough to approach Lata ji for a song. Nikhil told him they can still try one never know she may agree to sing if she likes the song and the story.

And as it was destined ,when Lataji heard the composition she liked it so much  that she agreed immediately.

"My co actor Yuvraaj Parashar who is also diehard fan of hers and believes she is the incarnation of Mata Saraswati requested me if he could attend the recording. When i touched her feet she gave me blessings excitedly," says Yuvraaj.

"It makes me believe if we believe in our dreams and thoroughly  pursue them one day they do come true," says Kapil.