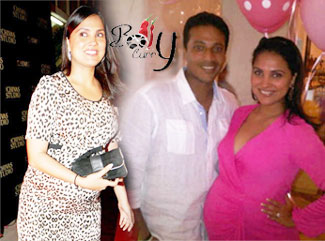 with tennis star Mahesh Bhupatti early in February this year. And for a couple who for several months remained silent in response to media's speculations over Lara's pregnancy, this former Miss Universe beauty is being anything but shy posing for the shutterbugs with her heavy bump now!

Due for delivery in January '12, Lara Dutta's recent tweet was a picture post with hubby Bhupathi from her baby shower, which read - "Had the best baby shower! So much love and lots of blessings! Thank u all as well for all your wishes."  [(c) Twitter]

Lara was also spotted looking her style icon self as ever, in a short animal print dress which made no secret of her baby bump, when she attended Rohan Sippy's musical All the Jazz And Love at the Chivas Studio.

BollyCurry sends the warmest wishes to the excited parents-to-be, Lara and Mahesh!