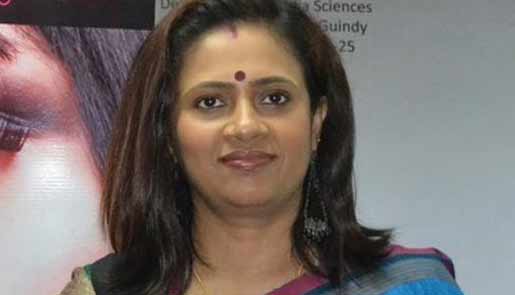 Actor-filmmaker Lakshmy Ramakrishnan's biggest strength is her family which has stood by her in all her endeavours. Now, they've even contributed to her upcoming Tamil directorial "Nerungi Vaa Muthamidathe".

While Lakshmy's husband has played a small role in "Nerungi Vaa Muthamidathe", her youngest daughter assisted her in direction.

"My family has someway contributed to all my activities. Right from my first job in event management to my first directorial 'Aarohanam', they've been part of my journey. My second daughter Shruti assisted me in my first film," Lakshmy told IANS.

"In this film, my daughter Shreeya, who was looking for an internship, decided to assist me. It's through the film that she graduated to be assistant director. I convinced Ram (husband) to play a small role and he was happy to do it," she said.

"Anoop has been into acting for quite some time. He's a theatre artist and he recently acted in his Malayalam production 'Mr. Fraud' as well," she added.

Lakshmy herself has also played an important role in "Nerungi Vaa Muthamidathe", which is gearing up for release soon.

Divya Agarwal says ''Me working is for the father and the peace of my ...

Ayushmann Khurrana is Not Staying with his Family; Reveals the Reason ...