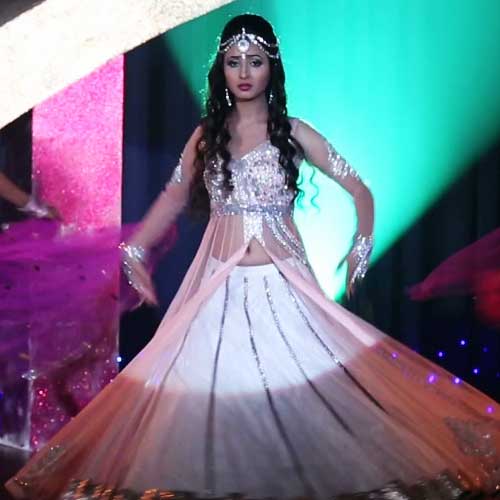 Ravi Ojha's popular show Gustakh Dil on Life OK is gearing up with an interesting track where Laajo will be seen performing for the competition. Later the interest will build up even more as  Laajo (Sana Amin Sheikh) and Ratri (Leena Jumani) will shake their leg on the famous Bollywood song Kamli kamli from the film Dhoom .

As seen in the ongoing track, Laajo will fear of losing the competition after she has already faced a wardrobe malfunction. But her sporty husband Nikhil (Vibhav Roy) encourages her that she will have to win the competition to prove his mom (Meghna Malik) and Ratri wrong and he will help her out to face all the challenges.

As per our sources, "She will be seen performing on the song Leja Leja Re where she will perform gracefully but at the end Laajo who is nervous will fall and hurt her leg. Later there will be a final tussle between Ratri and Laajo on the song Kamli Kamli where Laajo's ghunghroo will break and thus she will get hurt while dancing. Still she won't stop dancing and injures her feet which is bleeding profusely. Finally she will succeed in winning the competition, defeating Ratri."

We got in touch with Sana Amin Sheikh for which she said, "Yes there will be a tussle between me and Ratri. My ghunghroo will break I don't know whether it is an accident or it has been plotted by Ratri. My look in both the song will be different as in Leja Leja Re I will be seen wearing an Indian outfit and in the next song it will be a western look."

"I will be seen tensed in the first song because there is something which is troubling Laajo and what is troubling that you will have to find out by watching the show. It's a surprise for the audiences."

What surprise is awaited in Gustak Dil?

Kazimierz 6 years ago This is a great news that Laajo will win that is what we waited so long. Love you Sana and Vibhav you're magnificent keep rocking and stay blessed!!!!

harinisriram39 6 years ago Thank God, Laajo finally wins. It was too good to see Nikhil supporting and encouraging her.

ak75 6 years ago More hurdles for Laajo ...and finally she wins !! Would luv to see Barkha's reaction .

Sayali_23 6 years ago thy are dragging this whole track tooo much...

ASH_99 6 years ago Good to know that Lajjo will finally win!! Sana amin shekh all the very best to you for the competition. And Vaibhav roy love you lot.. you need to prove Barkha wrong so put in all your efforts we are all with you.. !!
Would have been better with less problems in the competition at least..

sami01 6 years ago Hey bhagwaan laajo where u go problems show up but am glad she will win.makers please keep nikhil important in story. I don't like stupid falls and catches with sagar