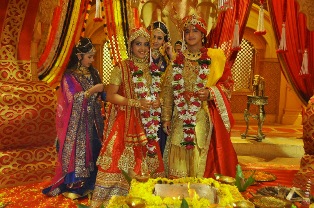 The much awaited wedding of the great warrior of Mewar aka Kunwar Pratap with his lady love Ajabde, in the historical show Bharat Ka Veer Putra Maharana Pratap on Sony Entertainment Television has turned out to be one of the Maha weddings on Indian Television.

The royal Rajputana style wedding celebration has been grabbing the eyeballs of the viewers. The wedding procession which went on for almost 15 long days has been a grand affair. Adding his views on the Maha Vivah on Indian Television, Abhimanyu Singh, CEO of Contiloe, shares, "The royal wedding of Maharana Pratap (Faisal l Khan) and Ajabde (Roshni Walia) has been a festive moment for all of us.

Ajabde looked absolutely mesmerizing in her ethnic attire and jewelry specially crafted for the occasion. Maharana Pratap looked charming and admirable as always. To make this as a triumph endeavour everyone from VFX, Costumes, Sets, Production and Direction have worked in a coordinated fashion, making this Royal Rajputana Wedding one of the grandest event seen on the Television."

The regal costumes have been much spoken about which have added to the perfect Rajputana look. The lady behind the gorgeous designer outfits, Neerusha Nikhat adds, "I am inspired by the royalty of the Rajputs and keeping that in mind I have worked on the elaborate embroidery and embellishment for the costumes of the bride and the groom. I wanted to make the costumes look very royal and hence I have used vibrant colors. Keeping the grandeur wedding celebrations in mind, the costumes of the queens, kings and the baaratis were also designed accordingly making the most awaited wedding sequence look very royal."

vampsome_smiley 6 years ago It was the best VIvah ever !
I miss Roshni Walia and Faisal Khan so much..
luv u bth kiddos !

..VB.. 6 years ago I am so happy PrAja are
Finally married couple .

Chitra89 6 years ago The bridal costume of Ajab and Pratap was just stunning. Faisal Khan and Roshni Walia looked absolutely gorgeous on those costume.
Neerusha ji, you did an amazing job with those costume.
Can't believe our PrAja is finally married! Love you Roshni Walia and Faisal Khan! Bharat Ka Veer Putra Maharana Pratap rocks!

KratikaTheDiva. 6 years ago This is called maha vivah