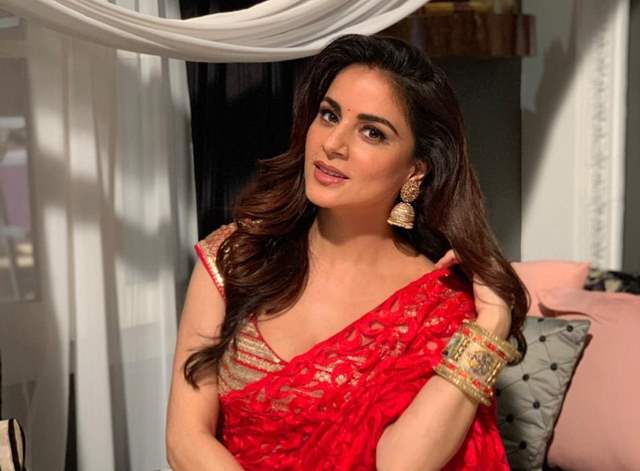 With the lockdown gradually lifting and people across the country stepping out into the new normal, Zee TV resumed shoots of its popular shows and reconnected its audiences with the journeys of their beloved characters. Kundali Bhagya, which has been the top-most show of the Indian Television industry, also offered a rather interesting twist to its viewers after its comeback. While the wedding drama in Karan (played by Dheeraj Dhoopar) and Preeta’s (played by Shraddha Arya) life has kept the audience on the edge of their seats, little does anyone know about what went into creating Preeta’s gorgeous post-wedding look.

Post her wedding with Karan, Preeta looks fresh as a daisy in a bright red saree on the show. The golden jhumke and the red and golden chooda uplift her glam newlywed look. Her make up is on point and Shraddha carries her outfit with panache. However, we are sure no one knows that the actress conceptualized this look completely by herself! The fashionista loves to indulge in styling as and when she can and when she got to know that her look would change after the wedding, she requested her creative team to let her design the post-wedding look. She and her team then worked on the look and when they presented it, everyone was blown away.

Talking about styling herself for the show, Shraddha revealed, “Talking about styling herself for the show, Shraddha revealed, “Preeta had a vibrant look since the start of the show, however, post her marriage with Karan, the team was planning to change her look slightly. When I heard about it, I got very excited and asked my team if I could design my own post-wedding look and they readily agreed. After a few brainstorming sessions with my stylists, Reynu Tandon and Neeru, we came up with a charming look where Preeta not only looks like a newlywed but also grabs eyeballs with her stylish and fashionable avatar. When I dressed up, everyone on the sets of Kundali Bhagya was stunned. I felt so confident in the saree that had such elegant yet understated embroidery work. We kept the accessories and makeup to the minimum and I am excited to see the audience’s reaction to the new look.”

adoreyou 1 months ago Even though I don't watch KDB anymore for obvious reasons but Shraddha is such a charming lady. She has the right amount of elegance and poise. I love her look by the way , classy.