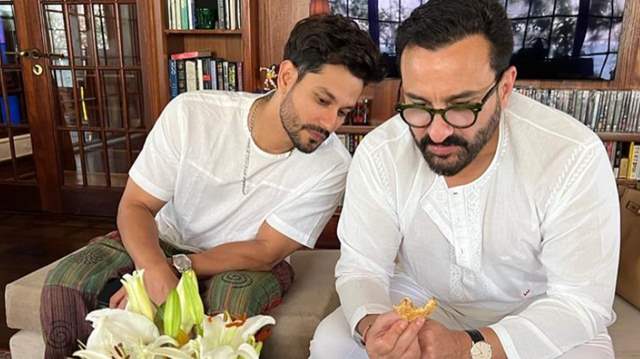 Kunal Kemmu revealed that his brother-in-law, Saif Ali Khan is his partner in crime, as evidenced by a photo from their Raksha Bandhan celebrations.

On the occasion of Raksha Bandhan on Thursday, Saif Ali Khan was joined by his sisters Soha Ali Khan and Saba Ali Khan. Saif's sons Taimur Ali Khan and Jehangir Ali Khan, as well as Soha's daughter Inaaya Naumi Kemmu, were all present.

Earlier Soha and Saba shared pictures from the celebration and now, Kunal took to his  Instagram handle sharing a hilarious picture with Saif. Kunal and Saif were twinning in white as they sat on a couch in the picture.

Saif Ali Khan was seen holding a samosa, while a plate with chutney and an almost-empty cup of tea could be seen on the adjoining table. Another samosa was seen on a plate on the table, and Kunal an empty plate and a bowl of chutney. Kunal and Saif were both staring at the last samosa left on the plate below.

Kunal quipped about his and Saif's apparent obsession with samosa as made obvious in the picture. He wrote, "The curious case of the last samosa. To eat or not to eat..? P.S. It’s a rhetorical question since it was obviously consumed...but by whom." He added the hashtags, "#partnerincrime" and "#samosa." Saba Ali Khan immediately took to the comments section. She wrote, "Eaten ...but curious case of how many??? And whom.. hmm."

For the unversed, Saif and Kunal shared the screen space together in the film Go Goa Gone and fans loved their on-screen camaraderie as well.

+ 3
1 months ago It reminds me of kunals golmaal movie… where he takes chutney which was on ajay shirt.. lol for his samosa