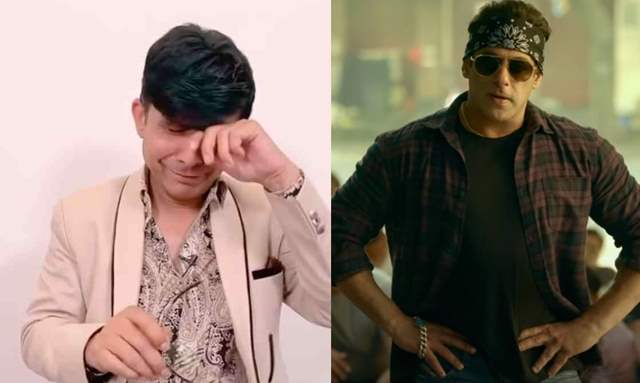 A lot has conspired since the release of Radhe: ‘Your Most Wanted Bhai’ and the controversies revolving around Salman Khan and Kamaal R Khan just don’t die down. After publishing Radhe’s review, the self-proclaimed critic declared that he will continue to review Salman Khan’s films even if the actor ‘touches his feet’ and requests him not to, seems to have changed his mind now.

However, KRK seems to have taken a backstep now as he has ‘voluntarily’ agreed to take down all videos about Salman from his YouTube channel, as he does not want to ‘hurt’ him.

In a new tweet on Friday, KRK said, “Dear @BeingSalmanKhan I have voluntarily removed all my videos about you coz I don’t want to hurt you or anybody else. I will continue fighting case against you in the court. I will only review your future films if I will get permission from the court. All the best for future.” He wrote in a follow-up tweet, “Your team can notify me if I have left any video on my channel which offends you, so that I can delete that video also.” 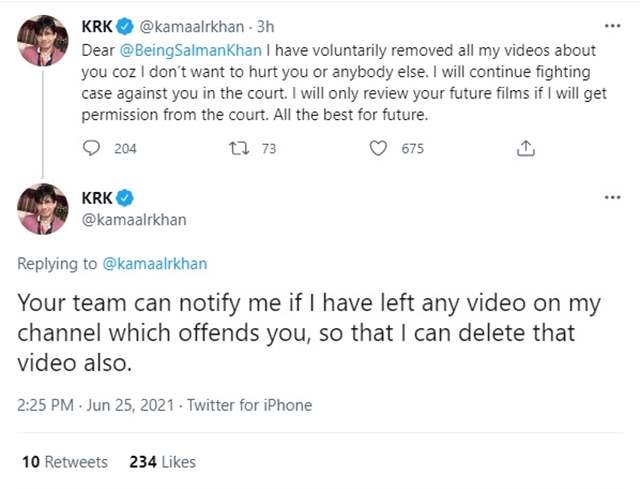 Earlier last month, Salman Khan had slapped a defamation suit against KRK where a notice was sent to the self-proclaimed movie critic by Salman's legal team. Sharing the news, KRK took to his Twitter handle and informed his followers about the same in May 2021.

Earlier this month, KRK’s disagreements with Salman Khan took an ugly turn as the storm of disputes that sparked over the film 'Radhe: Your Most Wanted Bhai' was redirected towards people around Salman.

Radhe’s female lead Disha Patani was also dragged amid the controversy between the two. KRK has pulled off one such act that could undoubtedly increase the mercury of Salman’s mind. The self-proclaimed critic shared some old pictures of Disha Patani on his official Twitter handle.

Reacting to Salman’s defamation suit against him, on May 27. KRK had shared just the first page of the notice, claiming that it was because of his review of Salman Kahn's latest release, Radhe.

Meanwhile, a Mumbai Court on Wednesday restrained Kamaal R Khan from posting or publishing any defamatory content against Salman Khan, his business ventures and/or films. This is an interim order was reportedly passed by the court after hearing the civil suit filed by Salman and it will continue until the court passes judgement in the case.

TheLostWriter 1 months ago so basically if you are salman then only court will do something.

1 months ago Salman is a gangster. He can’t handle criticism. Such a sore loser. Radhe was a big flop. I hope all his future films fail miserably.

1 months ago KRK fan following is good and it makes Salman insecure. Otherwise why Salman is bothered?

+ 4
1 months ago Even Salman’s Dad did not like Radhe so I don’t get the point of this defamation case. Salman should have gone to jail for killing people and animals and hurting Aishwarya