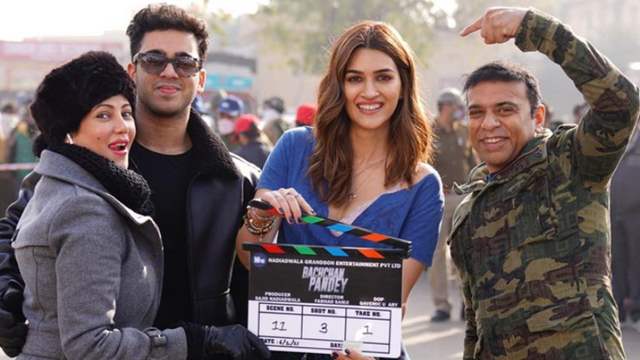 After months of lockdown, the nation is slowly moving towards the unlock phase and the entertainment business is getting back on track in full force.

As the new year has kickstarted with a bang, Nadiadwala Grandson has also commenced the shooting of their upcoming film titled Bachchan Pandey starring Akshay Kumar and Kriti Sanon in lead roles.

Producer Sajid Nadiadwala is all set to shoot in Jaisalmer with the entire cast. The makers recently roped in Jacqueline Fernandez, Arshad Warsi and Pankaj Tripathi for his upcoming action-comedy and this new addition has elevated the excitement for the film.

Kriti took to social media to share pictures from the first day of shoot and wrote, "1st Day of 1st film shoot in 2021!! With the production that gave me my very 1st film!#BachchanPandey Here we go."

She can be seen beaming with excitement as she poses with the clapboard. In another picture, she posed with producers Warda Khan Nadiadwala, director Farhad Samji.

This experienced & talented starcast is definitely set to deliver a thorough entertainer for the masses.

Bachchan Pandey is an upcoming action-comedy film directed by Farhad Samji and is produced by Sajid Nadiadwala.