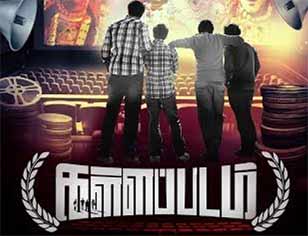 Vocalists of a popular Tamil theatre group Koothu-P-Pattarai have recorded a song in upcoming Tamil comedy "Kallappadam". The film's composer K says he recorded their voices with modern instruments.

"There are two songs with in one song, both of different genres. This film is based on the life of cinema and in one particular situation, a Koothu Pattarai song was recorded and the script demanded a modern song's incorporation within that," K told IANS.

"A team of Koothu-P-Pattarai vocalists from Krishnagiri and few modern musicians spearheaded by guitarist Vikram were spontaneous enough to work in tandem. I hope the audiences too love this concept," he added.

K also plays one of the leads of the film, which is directed by Vadivel. Another highlight of the film is that three other technicians - the director, cinematographer and the editor - also play the other lead roles.